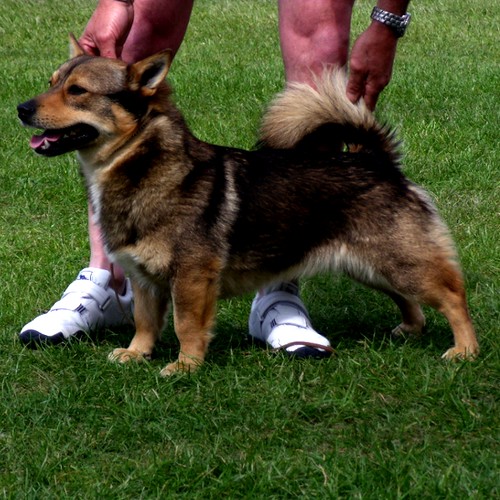 Some bred animals have had their starting line from the country of Sweden. Sweden has several breeds of cattle, dogs and horses. The following breeds of dogs originated from Sweden.

•Smålandsstövare (also known as Smaland Hound) is considered to be the oldest scent hound breed from Sweden. It seems to have originated in the 16th century. Their hair is coloured black with tan colouring at specific areas. Of all the Swedish hound breeds, these are the smallest. They are neat looking dogs, with a short bob tail.
•Norbottenspets are now famous companion dogs, but in bygone days were bred to be farm and hunting dogs. It is a spitz type and considered to be ancient in its history. They are white haired with tan markings and a fluffy tail. They have a friendly dog-like fox look, and they are quite able hunters with skill to hunt brown bears!

•Jämthund (also known as the Swedish Elkhound) is a spitz type of dog. It has a wolf like appearance with a white haired underside.
•Schillerstövare originated in the late 1800s and is a scent hound breed. It is black and brown with long floppy ears and was primarily bred for hunting.
•Swedish vallhund is famous for living from far back to the times of the Vikings. This dog was useful to people as a herd dog, killer of vermin and guard or watch dog for the home. This dog has been fondly referred to as the little cattle dog of the Vikings. It is small and compact with a fluffy tail.
•Swedish Lapphund is a black long haired spitz type of dog. It was bred to herd and watch reindeer.
The following breeds of cattle originated from Sweden
•Fjäll cattle (also known as the Swedish Mountain breed) originated in the late 19th century
•Swedish Red Cattle (also called Swedish Red-and-White Cattle) are mainly utilized for a milk source.
•Swedish Hornless Cattle are bred for dairy and the bulls do not grow horns. Milk quantities from this type of cattle are lower than from other Swedish breeds, yet it has a higher fat content.
•Ringamåla Cattle are dairy cattle that are bred mainly in southern Sweden.
The following breeds of horses originated from Sweden
•Swedish Ardennes is a medium sized heavyweight draft horse and primarily bred to assist farmers in agriculture.
•Swedish Warmblood developed from a variety of imported horse stock in the 17th century.
•Coldblood Trotter are used as race horses
•Gotland pony or Gotland russ is considered to be an old pony breed.
•North Swedish Horse is a heavy horse and utilized in forestry related work.

There are a variety of other animals found in Sweden, such as eagles, seals, mice and hares and many that are not found in Sweden. Sweden does not have polar bears, yet it does have brown bears. About over half of the land in Sweden is covered by forests. It is within these forests that many wild animals are known to have their habitat.