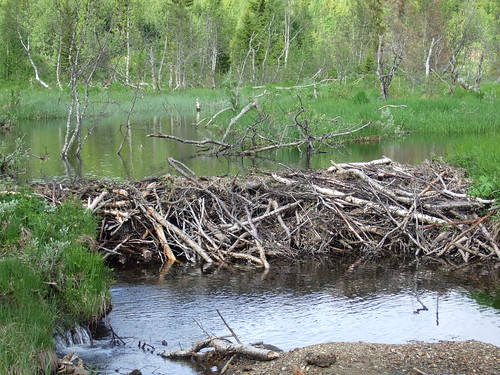 Beavers are among the biggest rodents and live for up to about 24 years. The beaver in Sweden is the Eurasian beaver (also known as the European beaver). This type of beaver tends to prefer living along the riverbanks and lakes within the dense parts of forests.

In Sweden beavers are more likely to be located in the central regions of the country. Beavers are thought to have a charming and social nature. They live in groups of 5 to 8 with a couple acting as the leader. However within the couple, the female is more dominant

Beavers can often be found busy constructing or building a lodge or nest. Some beaver nests in Sweden are known to have been built to the height of an average human. Beavers are even known to construct ponds or dams.

These mammals thrive on land and in water and they tend to equally divide their time between the two habitats. Being great divers and swimmers with strong rear web feet and a paddle shaped tail;beavers are well adapted for aquatic life with an oily waterproof fur.

A Beaver on land.

The fur of the beaver may be light rust, brown or black and it has often been highly sought after by humans. Castoreum is a type of secretion released by the scent glands of the Eurasian beaver. As the castoreum is considered to have medicinal properties it has led to increased hunting of it.

They are herbivores and their diet consists of various plants while they are considered to favour leaves, bark, twigs, roots, and aquatic plants. Their strong large teeth are known to cut away or bite or grind away at trees.

The beaver population in Sweden is increasing. Sweden has introduced the beaver back into Sweden, after its extinction in the late 19th century (late 1800s). It was mass onset of agriculture, deforestation and grazing with the constant strong hunting that lead to all beavers being at extreme threat of extinction in Europe. From 1922 to 1939, 80 beavers from Finland were transported and released into central Sweden. From that time the beaver population has thrived. Currently guided tours are available to view this creature. Often the best sites of beavers are while you are on a boat, floating along a river or lake.