The following are types of deer found in Sweden, red deer, fallow deer, reindeer, moose/elk and roe deer/western roe deer. All deer are herbivores. In the country of Sweden, the biggest mammal is the moose, also known as the elk. It is more commonly referred to as a moose in North America and as an elk in Europe. The hairs of the moose are grey-black and the legs are grey-white. They have a panned or webbed bulk antler from which extend thorn like tips. A male elk can weigh about 700kgs.

Elks are found throughout Sweden and it is usual to view elks in the forests of Bergslagen (a dense forest in the central regions of the country). It is the nature of the elk to be extremely timid and shy. It may be best to approach an elk by crouching in the grass or on the ground and to slowly move and watch it. Try only moving forward slowly and quietly when the elk is grazing. It is when the elk looks up and becomes aware that something may be approaching, that you should crouch down and keep still. Observing an elk in this manner enables quite close viewing of this wild creature.

There are a number of co-ordinated safaris on Swedish elk in the country. These safaris are offered between the months of May to September. Elks tend to be solitary, while other types of deer tend to roam in herds.

It is estimated that an elk needs about over 9000 calories daily to maintain a healthy weight. Yet as it gains all of it from plant foods that means there is much eating regularly. Besides the elk, other members of the deer family tend to have twig like antler. It is the males that have antler.

The red deer is one of the largest deer species in the world and can be found living in Sweden as well. A stag may weigh 160 to 240kgs. Its diet consists of seasonal plants and grasses. Sometimes, they may even eat nuts, fruits and acorns. The main predators of the red deer are humans and their dogs. After that it is the wolves, which tend to capture and hunt the older or sicker red deer.These vegan passive creatures are listed as semi-endangered. Stags make a roar when they defend their territory and mates from invasion or attack. 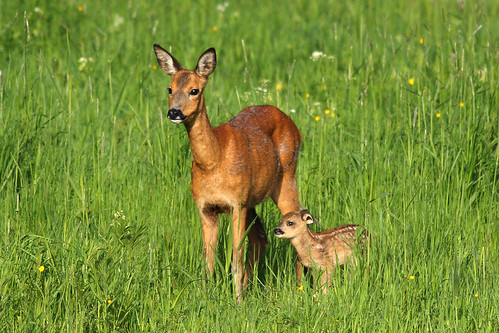 The most common deer in Sweden is the roe deer. It is more likely to be found in the south and middle of Sweden and less in the northern parts. The roe deer weighs between 15 to 31kgs, and considered a small to medium sized deer. The roe deer is known to be yellowish and golden red in summer, while in winter it is more brown or black with a lighter underside. All the males only have antler, which are lost in winter and then regrown during mating season.

The baby deer is often called a fawn or ass. The females are named doe, hind or cow, while the males are referred to as buck, stag or bull. A group of deer is called a herd.

To prevent vehicle collisions with deer, it is often common to have fences along highways in parts of Sweden outside the cities. This barrier prevents deer from venturing into roads and causing possibly fatal accidents.