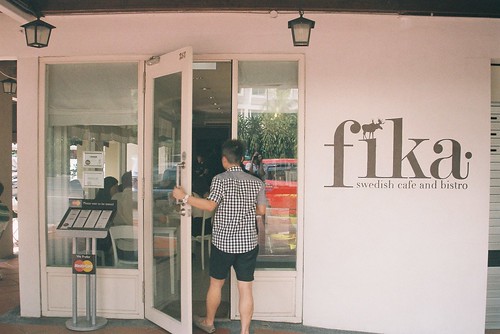 Fika is used as a noun and verb by the Swedes, to refer to taking a break for drinking coffee, tea or squash drinks often with something sweet to consume. Traditionally ‘taking fika’ would imply there would be coffee with something sweet, such as cinnamon rolls. Today fika essentially refers to a coffee/tea/lemonade/sweet treat break. The word fika also can mean just ‘coffee’. It is also acceptable to say in Sweden, ‘let’s sit down for a fika.’

Coffee is part of general get together amongst friends or work colleagues. Work places usually have a fika room, where coffee is supplied for workers. Some lunch restaurants and fast food outlets serve a free coffee after a meal.

The Swedes are major consumers of coffee, the second highest consumers per capita of coffee in the world. Coffee is a large part of Swedish culture. Kaffebröd, which means coffee bread, is a major part of Swedish cuisine. Kaffebröd are pastries, cookies, buns or cakes that are traditionally eaten along with beverages of strong coffee

•Kringla is a minor pretzel shaped cookie with pearl sugar sprinkled on top. The kringla is recognised as having been introduced to Nordic regions by the Roman Catholic monks in the 13th century. It may be a sweet, salty or filled pastry.
•The Princess Cake is a well-known traditional cake of Sweden. It is made with alternating layers of airy sponge cake, whipped cream and thick pastry cream. That is topped with a 2–3 mm thick layer of marzipan. The flavour is similar to angel food cake. The topping of marzipan is usually bright green with a sprinkling of powdered sugar and garnished with a marzipan rose. Originally the name was ‘green cake’ yet as the princesses of Prince Carl, Duke of Västergötland were known to like the cake it became known as ‘princess cake’. Variations of this cake can be made with other coloured layers of topped marzipan but then they are called prince cake. When there is a layer of red berry jam it becomes known as opera cake.
•Chokladboll, which means chocolate ball, is known as a type of fridge cake. The size of each chokladboll is smaller than a golf ball. A mixture of oatmeal, sugar, coffee, cocoa, butter, and sometimes a pinch of vanilla sugar are mixed into a mass and then rolled into small compact balls. The balls are then rolled in nib sugar, shredded coconut or sprinkles. It is usual to place them in the refrigerator before serving and if a harder chokladboll is desired, place in the freezer for a short while. The original name of chokladboll was negerboll (means negro ball), as the original name is considered offensive it is hardly ever used. Other names of variations of this treat are coconut ball, oatmeal ball and delicatoboll.
•Kladdkaka, which means gooey cake, is more often known as chocolate mud cake. This is a dense sticky chocolate cake with a soft centre. Basically considered to be a chocolate flavoured sponge cake without a raising agent. It is similar to the North American brownie but the brownie does not have the soft centre. This type of cake may be consumed with accompanying whipped cream or vanilla ice cream.
•Napoleon pastry is made with pastry dough, whipped cream, custard and jam and topped with icing and currant jelly.