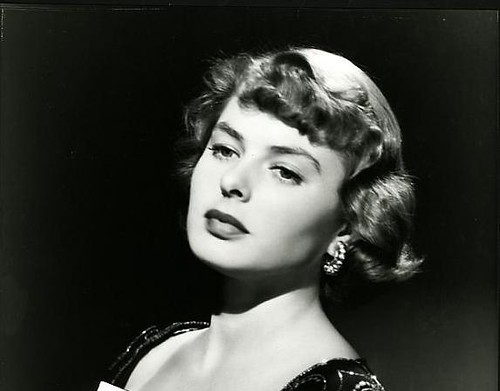 Ingrid was born on the 29 August 1915 in Stockholm Sweden and died on the same day as her birthday (due to breast cancer), at the age of 67 in London, England in the year of 1982. Her German mother died when Ingrid was three years old, tragedy strucks again when Ingrid’s Swedish father dies when she was thirteen years old. Being an artist and photographer, her father took photos of each of her birthdays until he died. He had hopes for her to become an opera singer, yet Ingrid knew her heart was in acting.

For six months past her father’s death, Ingrid lived with an aunt;yet her stay was short lived as that aunt died of heart problems. This led to another aunt and uncle taking Ingrid in to live amongst them with their five children. There were family rumours that Ingrid’s maternal side may have had Jewish members.

The pivotal and vital entrance point for Ingrid to get a foot into the door of acting was at the age of 17, by entering a competition in acting by the Royal Dramatic Theatre (an acting school or training place in Stockholm). Despite Ingrid’s fear that she had failed to impress she had an immediate success with the judges. This enabled her to being granted a scholarship in acting at the Royal Dramatic Theatre.

The expectancy was for the female pupils to have three years of teaching before being able to gain proper film roles. Yet Ingrid left the school after a year to pursue her acting career full time. Ingrid starred in Swedish and German films, and in 1937 married Dr. Petter Lindström (a dentist then neurosurgeon). They had a child named Pia, born in 1938.

The following year, Ingrid sailed to North America as Hollywood producer David O. Selznick wanted her to star in Intermezzo: A Love Story which was an English remake of one of her previous Swedish films. This film became a wide success. Ingrid was noted for being conscientious and not a fake (yet rather a natural or true woman) by insisting that make-up not to be done to her.

Ingrid is most well known for her role in the 1942 film Casablanca. During her acting career she starred in alternating European and American films.

During her eight year diagnosis with breast cancer, she continued acting. Her martial history includes three marriages and each one ending in divorce. Four children were born to her, a son and pair of twin girls from her second husband, the Italian director Roberto Rossellini. In 1958, Lars Schmidt, a theatrical entrepreneur with a background from an affluent Swedish shipping family become her third husband until 1975.