Kalmar is the capital of Kalmar County, situated southeast of Sweden. This city is recognised as being one of the oldest cities of the country (recognised from the year of 1027) and was one of the most important cities of Sweden from the 13th to 17th century. Its location near the Danish border and being at the shore line did highlight its importance. It is situated near the Baltic Sea and currently has a lovely harbour.

Since ancient times there have been inhabitants around what is now known as the city of Kalmar. Kalmar seems to have roots back to when it was a town in the 11th century. The town has evolved over the more recent years into an industrial city.

The old city wall is still existent (and with much of the city old buildings) it is being well maintained. Öland Island is connected to Kalmar by a bridge, which in the past was once Europe's longest bridge - extending 6 km. It is known as the Öland Bridge and was built in 1972.

At the centre of the city is Kalmar Castle. The first construction on what would become this landmark castle was in the 12th century, when a round tower was erected as ‘a look out’. In the 13th century extensions were made to this tower. In 1397, a significant historical event occurred in this castle – namely the birth of what was to be known as the Kalmar Union (when Denmark, Norway and Sweden were united by Queen Margaret I of Denmark). In the 1540s King Gustav Vasa and his sons arranged for renovations, and this has led to it becoming known as a great Renaissance castle. 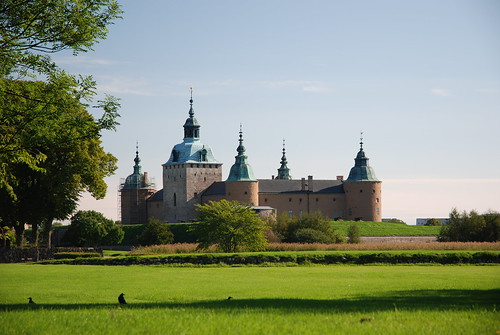 Kalmar has the Linnaeus University (a public university with another part of it in another Swedish city named Växjö).

Fuel efficiency is a prime focus in the city, with bicycle lanes being common and motor vehicles being powered by biofuel. A local trucking firm has computers which track its fuel efficiency, and such regulation reduced its fuel consumption by 10%.

There is also a local wood pulp plant that utilizes the steam and hot water (which used to be considered a waste) to supply heat and produce electricity that has been used for its own needs and extended to supply local residential homes.

The local university is called Linnéuniversitetet (Högskolan i Kalmar) and is reputable for its courses in seafaring, teaching and economics.

At one time there was a shipyard known as Kalmar Varv operating and Volvo had a factory here but both no longer exist. Currently there are two city squares and for shoppers there is the Baronen shopping centre, quite close to the one square. Numerous shopping malls have been built up, with several main shopping areas including the many small shops in the city centre.

Waterways are a large feature of this city. The centre of Kalmar is an island and anyone may rent a canoe to paddle around it.