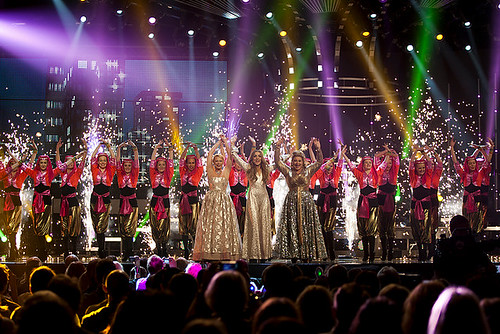 The Melodifestivalen is the Melody Festival, celebrated annually with a music competition organised by a Swedish national broadcaster and radio station. This has become a major part of Swedish culture and since the year of 2000, the Melodifestivalen has been rated the most popular television programme in the country. Additionally it is broadcast on the radio and the internet. The competition has a major effect on the local music charts as well.

For Swedish children, there is the children’s version known as Lilla Melodifestivalen.

This competition has been hosted nearly each year, since 1959 and the intention of it is to find and declare a representative for the Eurovision song contest. Since inception to 2012 of the Melodifestivalen, there have been five of its winners selected as the Eurovision song contest winner. The years that Sweden won the contest were in 1974, 1984, 1991, 1999 and 2012. The country to win the most Eurovision has been Ireland.

The inspiration of the Eurovision song contest stems back to the 1950s when Europe was torn after the Second World War. The European Broadcasting Union, based in Switzerland, decided to get a committee together to design light entertainment. Soon in 1956, 7 member countries took part with two songs submitted per country. The contest was won, by the host country of Switzerland. Since 1957, each country may only submit one song. For the first 50 years of the contest, the most popular song was acknowledged as ‘Waterloo’, original sung by ABBA (a Swedish musical band).

The song contest is an annual event participated in by many of the active members of the European Broadcasting Union. Eurovision is one of the longest running television programmes in the world, as it has been broadcast since 1956. In addition the popularity of the show has ensured it is one of the most watched non-sport events in the world. Various other countries have this contest broadcast over their televisions, such Thailand, Australia and the United States of America. Since it is broadcast via the internet, anyone in the world might be able to view this contest of European singers.

Every member country sends a song to be performed on live television and radio and then all participating countries casts votes for the other countries' songs to determine the most popular song in the competition. Basically how this works is that in each participating country there is a 50/50 voting between telephone voting by the public and voting by a jury panel made of professional musicians. The semi-final takes 2 hours, while the finals are broadcast over 3 hours and 15 minutes.

Every year the contest is hosted by a different country, usually in the capital city of the country. The general musical songs styles are versions of middle of the road pop, as this has a greater appeal to a wider range of audiences.

The Eurovision song contest has supported the launching of musical artists into international careers. Two main examples are when ABBA won it for Sweden in 1974 with their son ‘Waterloo’. Then there was Céline Dion, who won it for Switzerland in 1988 with her song ‘Ne partez pas sans moi’.