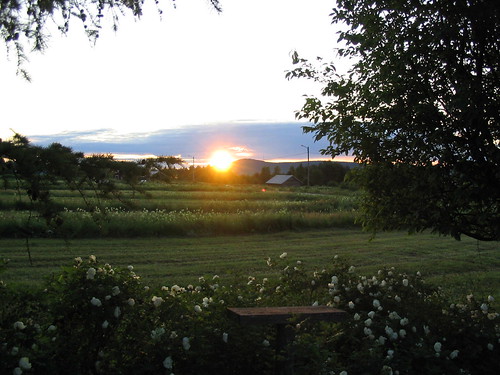 Midnight sun in the north of Sweden

The midnight sun is a natural phenomenon occurring in summer months at places north of the Arctic Circle and south of the Antarctic Circle where the sun remains visible during the local midnight. It occurs around the time of the summer solstice (which is June 21 in the north and December 21 in the south) and provided that the weather is clear, the sun is visible for the full 24 hours every day.

In the area of the poles, the sun rises once and sets once each year. During the six months when the sun is above the horizon it spends the days moving in circles around the observer, gradually spiralling higher and reaching its highest circuit in the sky at the summer solstice.

The number of days per year with potential midnight sun does increase the closer one is towards the (north or south) pole. Nonetheless, the midnight sun can be seen as much as 90 km outside the polar circle.

Many people may find it hard to fall asleep during the night when the sun is shining. Generally visitors and are most affected. Some local inhabitants in the area of the midnight sun are generally affected to a lesser degree. The effect of the midnight sun has been suggested to cause hypomania, where the person develops a persistent and pervasive heightened or irritable mood. People living or visiting the areas of where the midnight sun occurs, may be advised to use black out curtains during times for sleeping or wear sleeping masks over the eyes.

However this is a special and unique experience, to have continuous daylight for 24 hours. To be active outside during the midnight sun, and yet realise that normally in other parts further away from the poles people are experiencing night time.

The entertainment industry has used the midnight sun as a base for films, such as in the film Insomnia and its American remake. The film is a story about a protagonist who suffers from insomnia partially caused by the midnight sun;while investigating a murder north of the Arctic Circle. The murder takes place in Norway in the original film, and it has been changed to Alaska in the remake. In an episode of The Twilight Zone titled "The Midnight Sun", the Earth is on a collision course with the sun. This causes a midnight sun effect. In an episode of Northern Exposure entitled Midnight Sun, there is exploration of the effect of the midnight sun on a minor Alaskan town.

The midnight sun phenomenon does affect religious people who base their lifestyles on the movement of the sun, especially sunset. It requires adaptation and special amendments of some religious rituals for people in the area.

The Midnight Sun in Sweden is visible in the following places generally at specific times of the summer season (precisely at the height of summer):