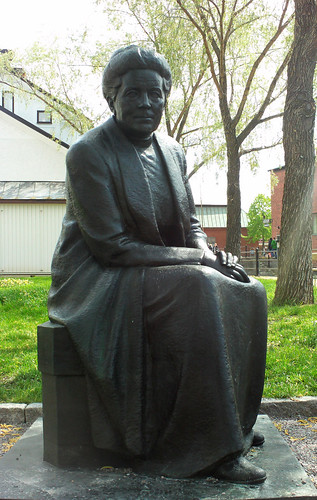 Statue of Selma Lagerlöf in Falun

There are a number of well-known Swedish writers. During the beginning of the 20th century, Swedish literature was led by Selma Lagerlöf and August Strindberg. It is from 1910, that Swedish literature began to be mainly focused on the novel. However there have also been some significant and talented Swedish modernist poets. Tomas Gösta Tranströmer, often referred to as a Christian poet, is a leading Scandanavian poet and the 2011 winner of the Nobel Prize in Literature.

Selma was the first female winner of the Noble Prize in Literature and the authoress of her best remembered children’s book titled ‘The Wonderful Adventures of Nils’. This authoress has had many of her literature stories turned into film productions.

August was an author, playwright, poet and painter. August has been considered and remembered as ‘The father of modern Swedish literature’. His one book, titled, ‘The Red Room’ and published in 1879 has often been noted as the initial Swedish modern novel. These two Swedes (Selma and August) were the authors of Sweden’s first modern novels.

•Astrid Lindgren – has written about 100 books. Astrid is recognised as one of the internationally most read children’s authors as her books have been translated into many languages. Born in 1907, this authoress did not hit success straight away. At first publishers turned away her stories. Then she won a children’s book competition and was active in her writing until the age of 85. Astrid died at the age of 94, in 2002 in Stockholm.

During the year of 2013, Astrid was recorded as the world’s 18th most translated author.
Her famous stories include Pippi Longstocking, Karlsson-on-the-Roof and the Six Bullerby Children book series.

In the year of 1988, USSR Academy of Sciences named an asteroid after this authoress. In 1995, the first Swedish micro-satellite sent up to space was also named in her honour. There is even a crater on the planet of Venus, named to honour her memory as a historically significant female.

•Henning Mankell is an established crime and children’s book author. His most well-known mystery series has the fictional character named Inspector Kurt Wallander. Among the various fictional novels, this author made a significant impact on Swedish literature. His written works have been adapted for film productions. A number of plays have also been authored by Henning, for live theatrical stage performances as well as specific screenplays for television.

•Karl Artur Vilhelm Mober is the author of The Emmigrants, a book series often noted as one of the best pieces of literacy originating from Sweden. The four books focus on a family’s move from Sweden to North America. Films have been produced based on the books.

•Modern literature can boast that Sweden’s crime authors have reached global best-selling ranks, from the beginning of the 2000s. Stieg Larsson was the author of the ‘Millennium Trilogy’, a crime series. In the year of 2008, he was ranked as the second highest selling author in the world. This fame came after his death, in 2004. Films of the series have been produced.