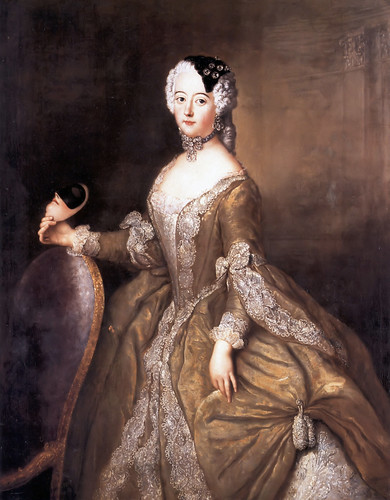 Hedvig Ulrika Taube was the first official mistress to a Swedish King. Although public mistresses were in vogue in France, this was not particularly the case in Sweden although many kings did have mistresses. Hedvig was the mistress to Frederick I of Sweden and she was given the title of Countess von Hessenstein. Hedvig was not at all keen to become a mistress to the much older king, who was about 38 years her senior and known to have many affairs besides having his wife, the former Queen of Sweden.

It all began when Ulrika Eleonora, born in 1688, became Queen in 1718. The young princess was the youngest of her parents, and after her father and older siblings died she claimed right to the throne. Her older sister had a son, yet Ulrika insisted she was the next in line and bought up the example of Queen Christina. After she renounced absolute monarchy rule, the Riksdag agreed to her being crowned as monarchy head of Sweden.

It was short lived as her husband, Landgrave Frederick I of Hesse-Kassel soon took over as monarchy leader in 1720. Ulrika was not able to bear her husband a child and she died in 1741, due to smallpox. She is remembered as being religious and often secluding herself due to the embarrassing reputation her husband gained from all his affairs and official mistress.

King Frederick I of Sweden was born in 1676. He was known for having fought in battles and in 1700 married Louise Dorothea, Princess of Prussia. Yet she died five years later. He then married Princess Ulrika Eleonora of Sweden in 1715 with the ambition of making her queen and in that way become king.

He fulfilled his ambition yet seems to have loose morals and slept with numerous women. The young Hedvig was procured for the king to try and subdue his many affairs. Hedvig came from a gambling bankrupt noble family. Her family supported her being ‘given’ to the king despite her young age and the king’s vulgar reputation. They needed the king’s pardon and the royal aides soon collected her to be placed as a lady in waiting to the Queen. Yet it was known she was being the king’s mistress. The young girl, still a teenager, is quoted as saying on her way to the palace;‘My fate is harder than I could imagine. I am being forced to expose my virtue to save a family ruined by gambling.’

After about two years in 1933 she gave birth to her first child and soon that baby died. The king made his mistress a countess after that sorrowful experience. The queen was clearly jealous of her husband’s mistress. It is recognised though that the countess lived a private, quite life where she was unhappy. Many people disfavoured her as being an official mistress and she was almost exiled from the country. As the countess was giving birth to the king’s fifth child, she had a still birth and died at the same time in 1744.

The king died 1751, with a reputation for being with prostitutes and his pronounced alcoholism.