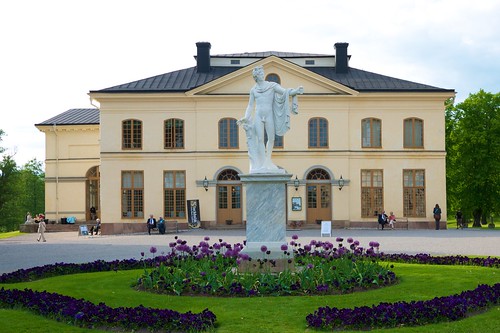 There are a number of opera houses in Sweden, among them are these listed well-known ones.

•Confidencen is a theatre in the National City Park, outside of Stockholm. The original structure of the building was built in 1671 and was used as a stable block. Then in 1753 Queen Louisa Ulrika decorated it to transform it into one of her important theatres. This theatre is part of the Ulriksdal Palace estate (which is one of five official residences of the royal family). Carl Michael Bellman (a highly regarded Swedish poet and composer) performed in this theatre, as well King Gustav III.

•The Drottningholm Palace Theatre (which has 400 seats) is based in Stockholm, at Drottningholm Palace. The Royal Swedish Opera has performed here. It is known for focusing on authentic performances and being the stage for the work of great composers, such as Mozart and Handel.

At one stage it was decorated in French décor, yet in 1762 it was destroyed by fire. The current opera theatre was opened in 1766. Unlike the usual stages, the stage of the Drottningholm Palace Theatre has more depth than width.

This theatre, being at Drottingholm Palace is part of the UNESCO World Heritage Sites.

•Folkoperan is another well-known opera house in Sweden, which began in 1976. It is based in Södermalm, a southern district of Stockholm. This theatre was started by Claes Fellbom. This theatre is recognised for its smaller stage and unconventional performances. Its stage is one of the most vital for freelance opera singers and musical performers.

•Göteborg Opera began operating in 1994, after construction began on the building in 1989. It has 1301 seats. This large opera theatre hosts a variety of shows;namely opera, ballet, musicals and operettas. It has become a highly reputable modern opera house with ample lighting and stage assembling.

•Malmö Opera and Music Theatre is based in the city of Malmö. Before 1992 it was known as the Malmö City Theatre. This impressive theatre has marble staircases and is decorated with works of art by some well-known artists. It has 1508 seats and consequently has claim to fame as one of the largest auditoriums in Scandinavia. Its large revolving stage is the site of opera, operetta, and musical performances. The opera company also has programs of opera for young audiences from age 3 to 19.

•The national stage for ballet and opera is the Royal Swedish Opera. The first native spoken opera performed in Sweden, was in 1773 by the opera company that was started by King Gustav III. That monarch is remembered as being a great patron and supporter of the arts and performers. This theatre is situated in the centre of Stockholm. Construction began in 1775 and in began operating in 1782. King Gustav III was killed in the foyer of this opera house and his son (who took over as king) had the building closed down for a period of time.