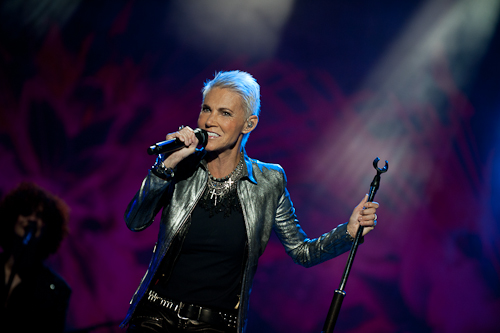 Roxette is a duo consisting of Marie Fredriksson and Per Håkan Gessle. Roxette has achieved global fame with some well-known songs. Roxette was formed in 1986 after the suggestion by Rolf Nygrenthese (Managing Director of EMI) that these two joined.
•Marie was born in Össjö on the 30 May 1958;from a poor family and was the youngest of five children. She is known to have spent a great amount of time singing and playing music in her youth;as she grew her passion increased. At the age of 17 she began as a student in a music college. Marie performed in music bands with two of her boyfriends. Per shared a rehearsal studio with her and had a huge part in arranging for Marie to meet his producer, this lead to a contract.

It may have been that Marie was nervous and exhibited low confidence, yet with the encouragement of Per she soon began her solo career as a singer. Marie and Per joined as Roxette to sing English songs which might appeal to Europe (which was uncommon at that time for Swedish performers).

Marie married Mikael Bolyos (Swedish singer-songwriter, pianist and guitarist) in 1994;a year after their first child (daughter) was born. She had another child (this time a son) in 1997.

In 2002 it was discovered that Marie had a malignant brain tumour. Surgery was performed, followed by chemotherapy and radiotherapy. Her ability to read and write needed practice afterwards and she is left with blindness in her right eye. Less than a year later in early 2003, King Carl Gustaf XVI of Sweden awarded her the ‘Royal Medal with Blue Ribbon’.
A book of her sketches has also been published as Marie has always had a passion for drawing.

•Per Håkan Gessle was born on the 19 January 1959 in Halmstad. He has been active in his career as a songwriter and musician since 1976. He was an original member of the music group Gyllene Tider, yet when their popularity waned, the group disbanded in 1984 he began to do solo songs. Per soon became a part of Roxette. In later years Per would do tours as part of Gyllene Tider successfully.
In 1993 he married his long-time girlfriend named Åsa Nordin and they have a son together.
Roxette’s song ‘The Look’ raised them from moderate stars in their home country to international acclaimed musical artists. This song was a number one hit in USA. Future other songs would reach the same number one rating in various countries.
The song titled ‘It must have been love’ from the movie ‘Pretty Woman’ was originally a Christmas lyric written by Per. The film producers wanted an original from Per but due to time constraints he just re-edited it and it became one if Roxette’s most memorable songs and held the position of ‘topping the charts’ for two weeks in the USA.
In 1994 ‘Crash! Boom! Bang!’ among many of their songs was also well received by the public.
They have also continued to do tours as Roxette and maintain solo careers.
Some of their many awards for their pop rock music includes:
•MTV Video Award twice
•Grammis Pop group of the year
•Gold Bravo Otto
•Brit Award