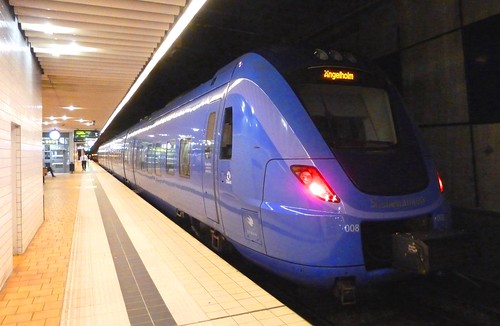 Sweden has a highly evolved rail network. The trains are modern and reach all over Sweden. A list of private rail operators includes Arlanda Express, Arriva, Veolia, DSB First and JLT. There are trains commuting every hour between the major cities of Malmo, Helsingborg, Gothenburg and Stockholm.

Many of the high speed trains travel at about 200km/hour or up to 205km/hour and there is infrastructure being placed for increasing some trains to 250km/hour. Copenhagen to Stockholm takes about just over 5 hours. Malmo to Stockholm takes just under 4 and half hours. Göteborg to Stockholm is about 3 hours.

The original two main rail lines were built from 1860 to 1864. The first major rail line was operated by electricity in 1915.

The train compartments can be travelled in first or second class. There are some compartments that especially cater for families.

Rail traffic is watched by the Swedish Transport Association.

The rail network in Sweden is the 21st longest in the world at about 13 000km, which all began in 1855. The main operator is SJ AB, a state owned rail operator. Sweden belongs to the International Union of Railways. Green Cargo is a cargo rail operator and also state owned. If SJ has not got the contract in some counties, then it will be either another Swedish owned operator or another EU country operator that will have the contract to transport train travellers.

Sweden has rail links to neighbouring countries of Denmark, Finland, Norway, Germany and Poland (it is ferry trains with some of these countries).

The Stockholm Metro is a metro network in the capital city. The pre-metro began in 1933. After deciding to build the metro network in 1941, it ran its first metro line in 1950 and since then seven lines have been built so that in this present time there is a structure of a 100 stations (47 underground and 53 above grounds). This metro network is over 105km long and known as the most decorated in the world.

The maximum speed on the Stockholm Metro is 80km/hour. The average daily ridership on this metro network is 1,122,000. This is an impressively reliable and well regulated public transport system.

Since the mid 1980’s graffiti has become a major problem. To prevent graffiti, the Swedish Police Force has assigned a special task force (Klotterkommissionen) to handle the matter. Graffiti vandalism is a huge problem on the trains and walls of the metro system that is being watched and even private security contractors are hired to manage it. If graffiti is sprayed onto anything, it is cleaned up quickly or the tram car or train is taken out of service.

Stockholm metro runs electrically and the Blue (at one time it had newer train stock) and Red lines run at a maximum speed of 80km/hour and the Green line at 70km/hour as it has more curves.
Tågkompaniet (a privately owned rail operator) runs along central Sweden. Rail network in Sweden is efficiently operated with security safety always being considered for safe journeys.