Sarek National Park features about 100 glaciers and several mountains over 2000 meters in the area of land under Jokkmokk Municipality, in Norrbotten County (northern most county of the country). As the park is within the Laponian Area, which is a UNESCO World Heritage Site;this national park has special significance.

There is not much flora in the park, yet the animal life in the great valleys is thriving. A hiker may catch the sight of a bear, wolverine, lynx or a large elk.

This park is ideal for anyone seeking to be in the best preserved untouched parts of wilderness. Thousands of years ago, hunter gathers lived in this area mainly feeding on the reindeer. The great mountains were seen as religious places and there is evidence of sacrifices and places of worship being made at the foot of the mountains.

The reindeer became not only a source of meat but also to provide milk for the Sami people. Transportation was another role the reindeer could provide and by the end of the 17th century, the Sami were mainly reindeer herders. The life of the Sami began to be organised around the need of the reindeer to find pasture lands. 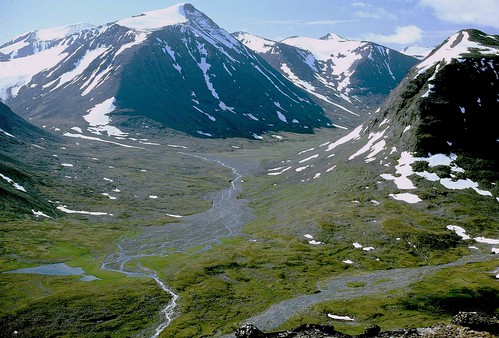 As the Sami are an indigenous people it becomes a fine balance in protecting their way of life and preserving the natural landscape. As the park is situated on territory belonging to the Sami villages of Sirkas, Jåhkågaskka and Tuorpons, the Sami who are legal residents of those villages are permitted to pasture their reindeer in the park too. In carrying out these activities, the Sami have the right to use motorised vehicles such as snowmobiles or helicopters yet these activities may affect the natural wild life.

In 1732, it is recorded that the first Swede;by the name of Carl von Linné, ventured into this region to explore the mountains. Charles Rabot, was a Frenchman who was the first to summit Sarektjåkkå (the second largest mountain in the country located on the eastern border of Sarek National Park) in 1881.

In 1872 the first national park was opened, this inspired the Swedish polar explorer, namely Adolf Erik Nordenskiöld to propose using the new concept to protect Swedish nature. Various men gathered together and parliament accepted this which led to the first 9 National Parks in Sweden being officially declared in 1909. At that time there were not any in Europe. Sarek National Park was one of those parks;and consequently can lay claim to fame as being among the oldest in Europe.

There are not any marked trails for hikers, as well as no accommodation. Anyone hiking in this park should be an intermediate to advanced hiker;as the lack of shelter, along with alternating weather and dangerous wild terrain does require experience to safely explore. Despite the streams being considered dangerous and hard to cross without proper experience, there are only two bridges. The water levels tend to be higher in the summer months, as the ice glaciers have melted more. This area is also noted as being among the rainiest in the country especially in summer, which affects hiking.

High peaks and narrow valleys are part of the landscape, which is mainly an alpine area.