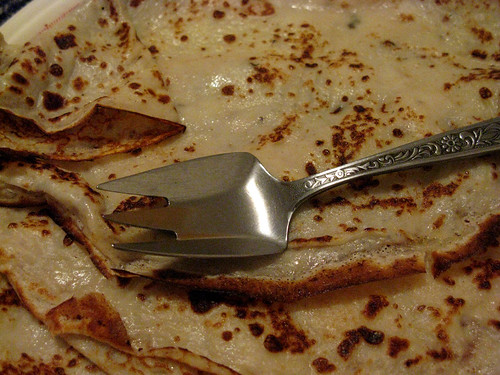 Lent (a time of a type of fasting primarily observed by Catholics) begins on Ash Wednesday. The day before Ash Wednesday, is commonly celebrated in various countries as Shrove Tuesday. This day changes as it is determined by when Easter falls on the calendar. It is always the seventh Tuesday before Easter and 47 days before Easter Sunday. It can occur anywhere from 3 February to the 9 March every year.

Mardi gras is the French term for Fat Tuesday and refers to the consumption of rich fatty foods before the 40 day period of fasting during Lent. This is a fast focused on only eating plainer foods and avoidance of richer foods such as meats, eggs or dairy.

Shrove Tuesday is also known as Fat Tuesday, Pancake Day and Pancake Tuesday. The root of the word ‘shrove’ shows that this was also a day of confession. Yet today it has become a day of feasting on pancakes or special types of bakery, in Sweden this day is celebrated by people generally eating the semla. The day is also known locally as Fettisdagen which is Swedish for Fat Tuesday.

The Swedish semlor (plural of semla) of bygone days (which was known as hetvägg) was only eaten on Shrove Tuesday, and after the Protestant Reformation, the semla was eaten every Tuesday from Shrove Tuesday until Easter Sunday. It is estimated that the general Swede may eat about five semlor annually, besides homemade ones. These semlor that are shop bought can be purchased every day from about Christmas up until Easter. 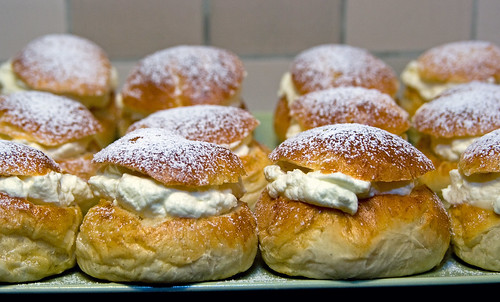 Annually at around the same time as when the semlor are ubiquitous in the shops and bakeries, there are local competitions on semlor taste testing printed in the newspapers. For a newspaper to declare someone as a winner, is known to be a major boost in sales for the specific bakery or shop. Recently an anonymous blogger, known as the semla man, has gained a reputability for directing consumers to where the best made semlor are in Stockholm. The semla man awards each store with points to guide consumers as to where some of the best prepared semlor are to be bought for a delicious sweet treat.

Traditionally the oldest form of semla was a plain bread bun consumed after being placed in a bowl of warm milk, called hetvägg by the Swedes. Today the semla has evolved into a wheat bun spiced with cardamom. The top is cut away and the bun is filled with milk and an almond paste and topped with whipped cream. The bun top is then placed on top of the whipped cream. The final preparation is to sprinkle powdered sugar over the bun. Other countries may prepare the semlor in a different fashion.

In February 1771 King Adolf Frederick of Sweden is recorded as having a major rich meal and 14 servings of the traditional hetvägg. This was his favourite desert and quite soon afterwards after all that food, he died from digestion related problems.

In 2001, the world’s largest semla was prepared weighing in at 160kgs in Linköping (a city of Sweden).