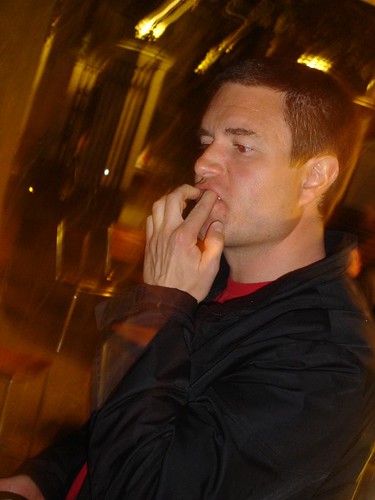 A man using his index finger to place a portion of snus under his lip.

Snus (although primarily tobacco) is ranked as a food product and all packages of it have labels stating the ingredients. Dried tobacco is grounded then mixed with salt, water, an aroma and an alkalising agent. This mixture is then heated. The snus is steam-pasteurized and not fermented.

It is considered that over 10% of the Swedish population use snus as of 2013. Snus began to be used in the 19th century and originates from the country of Sweden. The use of snus may have been inspired by snuff. Snuff is when tobacco is placed in the nose and inhaled through the nose and was widely done across Europe quite commonly in the 17th century. The use of snus is basically wet powdered tobacco that is placed under the upper lip. Snus has become more in vogue in Sweden since the banning of cigarette smoking in restaurants

As snus is not inhaled, many advocates of it highlight it does not harm the lungs as does cigarette smoking. Also as it is steam cured instead of fire cured (as is done in smoking tobacco and chewing tobacco) the levels of nitrosamines and some other carcinogens are reputed to be much reduced.
In 2006, a tobacco free snus was made in Sweden to provide users with a healthier option. This form of snus consists of tea leaves, coconut husk, or oat husks with salt and flavouring.

The Swedish form of snus, unlike the North American tobacco chewing, does not require the user to be periodically spitting. The bioavailability of nicotine tends to be higher from Swedish snuff compared to North American snus. The actual content of nicotine tends to be about 8mgs per a gram of Swedish snuff, the amounts vary dependent on the brand of snus. In recent years, manufactures have provided the public with stark (strong) and extra stark (very strong) nicotine containing snus. The stark may have about 11mg of nicotine per gram of snus and extra stark may have about 22mgs per gram of snus.

The following are types of snus:
•Loose variety – this is moist powdered snus that is rolled into a cylindrical or spherical shape, usually with the fingers and then placed beneath the upper lip.
•Original portion snus began to be manufactured from 1977. This form is discrete for users as the moist snuff is packed within small damp sachets. The brown wet sachet is easier to use and less noticeable.
•White portion snus is milder in taste and has a slower release of nicotine. Unlike the original portion, the white portion does not have a moist sachet and consequently it is dry and still white. However even when a dry black sachet is used with inner moist snus, it is still called white portion.

Original and white portions snus are sold in three main categories;namely mini, large and maxi. Mini size is about 0.5grams, large about 1gram and the maxi may be about 1,7grams. Furthermore some of these sachets are available in longer form whereby they are slimmer and longer for a more comfortable ‘fit’ beneath the lip and against the gums.

The sale of snus is proclaimed illegal by the European Union, yet concessions have been made for Sweden and Norway.