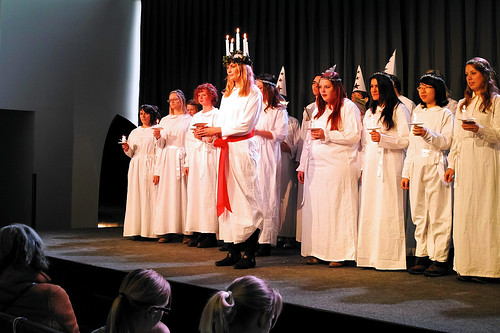 There a number of special days in Sweden that acknowledges or celebrates special events or traditions. Some days celebrate consumption of foods:
•On the 30 November the Day of Cabbage Roll (a popular meal) is celebrated, known as Kåldolmens dag.
•On March 25 is Waffle Day in Sweden, is a day when waffles are generally eaten. The waffles main constituent is butter.
•The cinnamon roll takes the name of kanelbulle (translated as cinnamon bun) and October 4 has been promoted as ‘kanelbullens dag’ (Cinnamon roll day), as the presumed origin of this food is from Sweden.

Some days are celebrated for fun, such as April Fool’s Day on the April 1. The purpose is to play a ruse or trick or prank on someone. When the person realises they have been fooled, the person states some lines, which translated mean:
April, April, you silly fish
I can fool you as I wish.
Two common commercial promoted special days during the year:
•Father’s Day is celebrated on the second Sunday in November, by bringing fathers breakfast in bed with a cake and present. A typical father’s day present is usually a tie.
•Mother’s Day is celebrated on the last Sunday in May and has roots in Sweden, from 1919. A mother is often given breakfast in bed, a present and made to feel special and appreciated.

The Santa Lucia day or St. Lucy's day is celebrated on December 13. This day is acknowledged to commemoration a Sicilian Saint. The Santa Lucia Day has been considered to be Sweden's most exotic holiday. On this day, in the mornings groups of a line of girls dressed in white robes and singing songs visit hospitals, company buildings, hotels, schools and other institutions. These girls customarily carry candles and have decorations in their hair. The leader of the train or line acts as Santa Lucia. She will have a crown of candles in her hair and a red belt around her white robe. Behind the train of girls there are also some boys dressed in white robes. These boys will have cone shaped hats with stars on them. The Santa Lucia and her Tärnor (name for the other girls) serve coffee, chocolate, cookies, ginger snaps, and saffron buns to the spectators. You may also notice a few people dress as red gnomes (looking like Santa Claus and known as the Tomtar). In the morning any homes that have girls, will also typically make a little Santa Lucia train.

In various Swedish cities and villages there are also Santa Lucia parades on this day. Pretty girls send in their pictures and are selected by judges or voters. The winner becomes the cities Santa Lucia and she will be riding on top of a car or on a horse through the town while all the girls who did not win follow her on other horses or on cars. All the girls are dressed in white robes. In the past the competition favoured blondes. However, today any hair colour and any skin colour can win and become the Santa Lucia.
It is a tradition in Sweden that the Nobel Prize winners get an unannounced visit from Santa Lucia early in the morning of December 13.