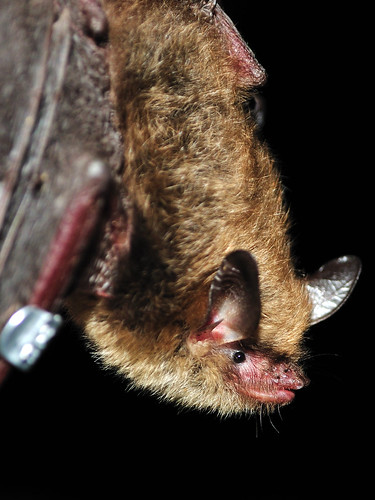 A northern bat (Myotis septentrionalis) after receiving some jewelry, a new identification band on its forearm.

In Sweden, 20% of all mammals consist of bats. Bats are the only types of mammals that can naturally fly, due to their forearms being formed as wings.

Bats are among some of the animals that use echolocation (also called bio sonar). It is when an animal sends out a voice or sound towards the environment and then there are echoes from that sound which return from objects around them. Bats generally rely on echolocation for navigation and for finding food in the darkness of night.

Bats tend to locate their homes in houses and other buildings, for the warmth that these structures provide. Cellars (common in Sweden for storing vegetables) are popular sites for bats to hibernate in. It is recognised that bats tend to return to the same site for winter hibernation every year.

There are some species that are decreasing in number, and it is suggested that this is due to the increase of human activities. After a mother bat gives birth, the baby bats generally are up and flying independently by three weeks of age.

Bats tend to be more active just before dawn and more noticeably just after dusk. Bats are not blind. The diet of the bat consists of mosquitoes, other insects, flowers, nectar and blood, while some species eat fruit. Other species actually seem to prefer the nectar of flowers compared to insects. Studies have indicated that most bat species cannot synthesise Vitamin C. This makes them reliant on plant based sources, like humans.

There are a variety of bat species in the country. The following is a brief on three species of bat found in Sweden:

Northern bat – lives in much colder climates than many other bats and is known to live in the far northern parts of Sweden. The adult bat weighs 8 to 16 grams and is placed as a medium sized bat, among other bats. These nocturnal bats catch their food with the aid of echolocation. Their diet is largely made up of mosquitoes. Male bats live alone in the summer months, while the females form a colony of 10 to 80 bats. The Northern bat is a common bat in the country and its numbers seem to be increasing.

The brown-long eared bat – is a much larger bat species and has distinctive large ears. These bats are slower flyers than other smaller bats. As this bat tends to search for food during the day, the use of eyesight is more important than echolocation. Caves, tree holes and sometimes buildings are generally the home of this large bat.

Parti-coloured bat – has fur that is coloured red to dark brown on the back and there is silver white frosted colouring. The bottom or underside is coloured in white or grey. These are migrating bats and some known travel distances flown by them have been recorded as far as 900km. An average adult may weigh between 12 to 23 grams. Females give birth to twins.

The following is a list of some other bats found in the country:
Bechstein’s Bat
Brandt’s Bat
Pond Bat
Daubenton’s Bat
Barbastelle
Serotine Bat
Common Pipistrelle