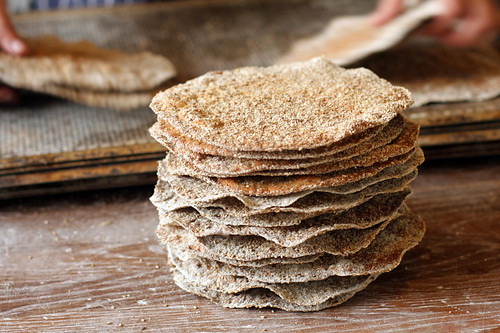 The following is a list of some common traditional bread in Sweden:

•Swedish Limpa bread – This is an anise flavoured rye bread that is traditionally prepared in Sweden. The main ingredients are rye, anise seed, molasses and often orange. It is suggested to be best suited for gourmet sandwiches.

•Simple rye bread – Generally this rye bread contains only rye and a little salt, as it is prepared as unflavoured. However the strong rye flavour is distinctive and quite tasty, which ensures it may be suitable for all meals.

•Crisp bread – Known to be served at breakfast, lunch and dinner, this flat and dry type of bread or cracker, consists of mostly rye flour. Crisp breads are light and will keep fresh for a very long time. Crisp bread was for many years considered a poor man's diet. However, in recent years there has been renewed interest in this bread in the Nordic countries. Since 500 AD, there are indications that crisp bread has been baked in central Sweden. It was made as round wafers with a hole in the middle so the bread could be stored on sticks under the roof. In 1850 a bakery known as AU Bergmans enka, in Stockholm, began producing Sweden’s first industrial crisp bread. Crisp bread traditionally consists of wholemeal rye flour, salt, and water.

Today, much crisp bread contains wheat flour, spices and grains, and is often leavened with yeast or sourdough, while milk or sesame seeds may be added. Traditional Swedish breads such as crisp bread are still prepared with the sourdough method. This way is a time consuming process as compared to yeast fermentation, yet the sourdough always ensures a crispier and light bread. The natural culture present in the sourdough (also known as starter or mother dough) improves the taste and texture of the bread, while imparting health-providing pro-biotic characteristics to the bread. It is known that some Swedish bakers keep and grow their sourdough to be alive for 40-50 years to prepare traditional Swedish breads.

Notable brands of crisp bread include Ryvita and Ry-Krisp.

•Tunnbröd (literally translated as thin bread) is the Swedish version of flatbread. Tunnbröd can be soft or crisp, and comes in many variants depending on the grains used, leavening agent (or lack thereof). The consistency and taste of thin bread can vary a lot. Traditionally housewives kept recipes a closely guarded secret only shared with other family members. Tunnbröd is a variation of Mjukkaka.

•Mjukkaka (literally translated as Softcake) is a round flatbread, the size of a plate, usually baked in a brick oven. This bread is usually made of rye flour, yeast, margarine, water, salt, milk and light treacle. Mjukkaka is used as any common bread and often served at breakfast or lunch with just butter.

The recipe for this bread is known to be handed over generation through generation in the northern part of Sweden, with ingredients varying depending on location and heritage. Mjukkaka can be baked in the bottom of an oven, in a hot pan or even directly on top of your stove on a heated plate.