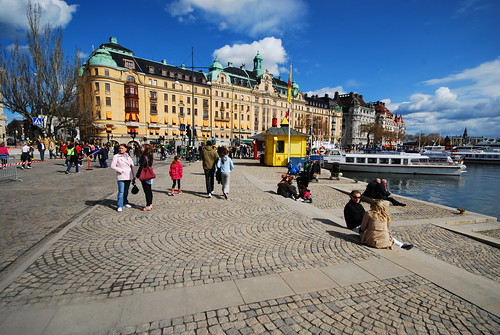 Nybroplan in Stockholm, Sweden on a sunny day.

Most of the weather is of a cool temperate nature yet the southern section is known to be warmer. The west coast is also warmer than the east due to the warm waters of the Gulf Stream along the west coast.

The annual rainfall is moderate due to Norway’s mountains breaking the rain. Summers are fairly low in rain but August can be quite wet. Rainfalls are common in the winter season in the far south of the country.

Maximum average temperatures for July are 20°C in the south and about 17°C in the north. Some hot periods do occur in summer with temperatures soaring to over 30 °C.

Winters (from October to April) are harsh when temperatures can fall to -50°C. Snow can be several meters dee

p in the north which gives a great environment for skiing and to about 20cm to 40cm deep in the south.
The following are some average temperatures for some of the main cities in Sweden.

STOCKHOLM - The average summer daytime highs in Stockholm are 20–25 °C with lows of about 13 °C, however on some summer days temperatures can soar to 30 °C. Temperatures in winter are about -5 to 1 °C and sometimes the temperature dips to below -15 °C. Spring and autumn are generally cool to mild, while winters can be snowy, mainly from December to March. There is light to moderate rainfall throughout the year.

GOTHENBURG - The average summer daytime high temperatures in Gothenburg are 19 to 20 °C with lows of 10 to 12 °C, however many days rise to 25–30 °C in the summer. This ensures summers can be quite warm. Winter temperatures are about-5 to 3 °C and it rarely drops below -15 °C. The winters tend to be cold and windy. Snow can occur from as early as October and right up into May, but is mainly during December to March. There is generally a moderate rainfall throughout the year. The warm Gulf Stream does protect the temperatures from being lower than some places at a similar or lower altitude.

MALMO – The temperatures are similar to Gothenburg as Malmö is situated in southern Sweden. Average summer highs are 20 to 21 °C with lows of about 11 to 13 °C, sometimes some summer days exceed 25 °C and occasional heat waves are common during the summer. Winters temperatures are -3 to 4 °C, and rarely dip below -10 °C. Some winters are almost snow free but when it does snow it is from December to March. Annual rainfall is light to moderate.

UPPSALA – The temperatures are noted as have risen over the years. The average highs are about 20°C with some summer day exceeding 30°C. While average summer lows are about 10°C. During the winter months temperatures can drop to below freezing