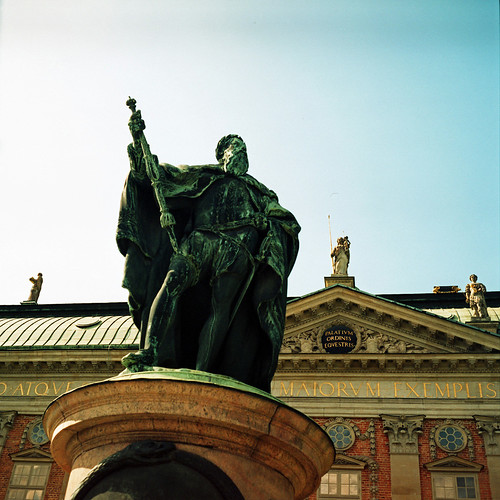 A statue of King Gustav Vasa of Sweden in front of the House of Lords (Riddarhuset) in Stockholm.

Sweden in the Nordic Council

The Nordic Council was formed after World War II, to form a stronger defence of the Scandinavian countries or regions. The time of its formation in 1952, was a time of distress for the Nordic region. There was the devastation of being occupied by Germany in Norway and Denmark, while Finland had endured a pricey war with the Soviet Union.

Throughout history there has been an attempt of a union, noticeable with the Kalmar Union.
There was a great civil war at one time in Sweden to overthrow the king of the Kalmar Union (The Kalmar Union is a term that was used for a number of unions between Sweden and in bygone days Finland was part of Sweden, Denmark and Norway, and in bygone days Greenland, Iceland and some islands were under Norway. The idea was to have a single monarch head and be an overall stronger power)

These Kalmar Unions took place from 1397 to 1523. This was a union of Sweden, Denmark and Norway but the Danes are remembered as having been unfair in their treatment of the Swedes. Also more importantly there was much competition for power between Denmark and Sweden during the times of the unions. Gustav Vasa was a nobleman who fought until Sweden was no longer under the control of the Norwegian-Danish King Christian II. Christian II was the king at the time of the Kalmar Union in 1523. Yet Sweden was intent to be free of being ruled of this king and becoming independent. This led to the Swedish War of Liberation.

Due to Gustav Vasa’s bravery and effort, Swedes acknowledged him by appointing him as their new King. By 1524, Sweden was liberated permanently from the Kalmar Union. However the Nordic Council was agreed on by various Nordic representatives in 1952.
This was about uniting Norway, Sweden, Denmark, Iceland, Greenland and Finland into a strong economic and political union.

This union of the Nordic or Scandinavian countries lead to a common labour market and easy access across borders without passports. The union still operates but more in a unifying way, and not in a controlling way between Nordic or Scandinavian countries. In 1971 the inter-governmental forum, called the Nordic Council of Ministers was created to enhance the Nordic Council. The headquarters of the Council are in Copenhagen (capital of Denmark).

The council has uses three official languages of Danish, Norwegian and Swedish;however its publications are printed in other Nordic languages;as well as English. The council does not have any power on its own. The council has not been active in any military co-operation as Sweden and Finland are neutral;while Denmark, Norway and Iceland are part of NATO.

The priorities of the Nordic Council often overlap with the European Union and European Economic Community and this has resulted in the council becoming quieter and less active. However there has been talk of expansion and of Scot land even being included into the Nordic Council..