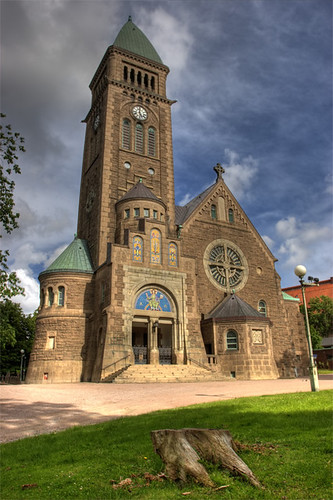 Vasakyrkan is a church in Gothenburg, Sweden. It is located in the area of Vasastaden, between Hvitfeldtska and Vasaparken. It is was founded in 1909 and is made of granite that was brought from Bohuslän. It underwent major renovations during 1999 and 2000.

Although the Lutheran Church is the main religion of Sweden this was not always the case. Norse paganism was the religion that was generally followed before the 11 century. Statistics show that even in the year 2009, many years later that somehow Germanic Neo pagans do still practice and follow pagan rituals and beliefs.

Monk Ansgar was the first monk to try Christianize Sweden, yet it failed and for about a hundred years attempts failed. By the time King Stenkil in 1060 become king, Christianity was established in most of Sweden.

It was the time of the Protestant Reformation that history looks back at the king as trying to gain control of the church and its assets;the reformation was a political tool used by King Gustav Vasa who was made to be the king in 1523.

After the 1530s the Roman Catholic Church lost is strong hold and its authority.

After this, the period known as the Lutheran Orthodoxy was lived out. From the late 18th century other religions were permitted and tolerated such as Roman Catholicism and Judaism. Up until 1860 it was illegal for Lutheran Swedes to convert to any other religion. From 1860 to 1951 the law granted that a Lutheran Swede may convert to another recognized religion. From 1951, a Lutheran Swede may leave the Luetheran Church without giving an explanation or reason and this was established in the Law on Freedom of Religion.

It was from 2000 that the state and church separated and the Lutheran Church was from that year not recognized as the church of the state;yet the church does still receive a degree of government support. There is a church tax;however Sweden does not have an official church.
The constitution has evolved to protect each citizen’s right to the freedom of religion. Statistics show that from 2000 to 2009 the percentage of Swedes belonging to the Lutheran Church has fallen by about 1% each year.

From the year 1996, a child is not automatically a member of the Church if one of his or her parents is. The child must be baptized to be a recognized member of the Lutheran Church.

All recognized denominations have the right to government financial support. Religious discrimination is illegal. It is mandatory for all pupils at public schools to have education on the world’s major religions.
Other religions are Islam (in 2009 there were 5% of the population registered as Muslims) which seems to be growing in Sweden to the extent that it is the second largest religion in Sweden after Christianity.
Atheism also seems to have a significant amount of thinkers, with estimates that 20% to 25% of the population is atheist.

The Church of Sweden adheres to the Lutheran teachings and is recognized as the largest Lutheran Church in the world.

About 2% of the population follows the Roman Catholic Church and these followers generally seem to have Polish, Croatian or Spanish origins. Other religions in Sweden are Judaism, Jehovah’s Witnesses and members of the evangelical free churches. There are probably other religions practiced but with a minor number of people, such as Hinduism and Buddhism.