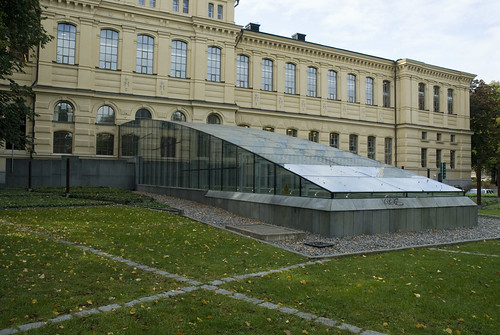 The library is situated in the park Humlegården in central Stockholm.

There is a highly historical magnificent, facility in Stockholm – the National Library.

The main duties of the library are stipulated as:
•To gather and preserve all Swedish publications, and ensure all these publications are available to the public
•To offer the service of being the infrastructure for the research community in Sweden
•To function as a research library, with an emphasis on the humanities and social sciences

This library has a massive amount of books and its annual increase is at about 35 000 volumes. This library is also an autonomous department of the Government.

The National library contains some exceptional literary treasures, such as the 13th century ‘Devil’s Bible’ which is not usually on display. It has become to be known as the devil’s bible as there is a legend about its 13th century creation and there is a large grotesque picture of the devil on one of the pages. This magnificent book, weighs over 74kgs. The book is 92cms long. The bible is in a wooden folder, covered with leather and decorative metal. Sweden obtained possession of this bible in the Thirty Years War in 1648. The army took it as plunder. The country of origin of the bible is thought to be the modern Czech Republic. It is estimated (by use of tests to recreate the writing) that it took five years of non-stop writing to do just the writing (not the illustrations). The pages or leaves (made from prepared mammal skin as was common in bygone days for writing, called vellum) are half of biblical texts. All the rest of the leaves contain other information, such as an encyclopaedia and medical knowledge of Hippocrates. The text is all in Latin with Hebrew, Slavic and Greek alphabets.

There is a park alongside the museum, and it has been a well sought out recreational site;since the 18th century for the city residents.

From the year of 1661, copies of every printed article have had to be kept with the Royal Library, another name for Sweden’s national library. However there are many literary scripts dated from early times and right from the Middle Ages in the library. It has also been a requirement for all electronic documents to have copies kept at the library, since 1993.

There is also a section of the library named the Audio-visual department. It is in this department that has a vast collection of movies, videos, TV and radio programs distributed in Sweden. Among the archives are also recordings of music and multimedia linked to Sweden.

The following are the main collections:
Swedish and Foreign (which includes many maps and much foreign literature)
Books
Film, tv and radio
Newspapers
Periodicals
Ephemera (consists of advertising and informational material)
Manuscripts
Posters
Pictures
Maps
Printed Music
Special Collections
Foreign Acquisitions
All these items, as of 2012, take up 140km of shelving space and will be expanding as the years progress.
The library is open every working week day and Saturday, while being closed on a Sunday.