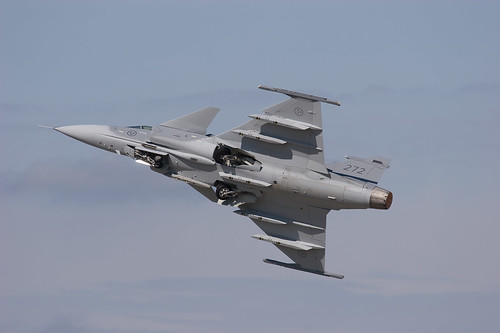 The air force is a branch of the Swedish Army Forces. The purpose of this branch is to organise and train air combat, which work together with the navy and armed forces to provide a comprehensive Swedish Armed Forces.

In July 1926, the air craft units of the navy and army were bought together and the Swedish Air Force was initiated. Although Sweden did not take part in World War II, there was trepidation of being intimidated or invaded by other great strong countries which lead to expansion of the Swedish Air Force.
Domestic fuel was utilized during the time of World War II, as imports were not dependable with a war raging on.

From 1945, there was great effort to modernize the air force. By 1950 the Swedish Air Force had air crafts that were among the best of the world. It was also during this time that Sweden built highways that could be used for landing and take-off strips by air crafts.

Sweden is rated as having the world’s fourth most powerful air force by 1957.

During the 1990s, the time also remembered in history as the end of the Cold War – a number of air bases were closed and the Air Force was downsized. As there has not been any major threat from the Soviet Union (an old enemy) the finance for the Swedish Air Force is not a priority and budget cuts have been implemented. In peacetime the role of the air force is to be a support for the civil community. In times of search and rescues the helicopter units have a needed role.

There are three wars that have happened and which included the Swedish Air Force taking participation:
•Finno-Soviet Winter War during 1939 to 1940, Sweden supported Norway from invasion by the Soviet Union
•The Congo Crisis from 1961 to 1964, Sweden was part of the United Nations peace keeping mission
•The 2011 Libyan civil war, to enforce UN mandated no-fly zone over Libya

The air craft of the Swedish Air Force includes, fighter units, helicopter unites and other air craft. A ‘wing’ is a term generally used to refer to a unit of command in aviation. There are Air Force Wings with specific fighter air craft based in different locations in the country. Specific helicopter units are also based at various areas in Sweden, yet are all under one Helicopter Wing.

Outside of Linköping (a city in southern middle Sweden) is the Swedish Air Force Museum. The museum has an assortment of instruments, uniforms, engines and air craft. There is also the library, with archives of documented literature and photographs which is part of the museum. The museum is regulated by the government as it forms part of The National Swedish Museums of Military History (a government agency).

The Swedish Air Force Museum began public displays since 1984, and today also offers a restaurant and café. This impressive museum has been the recipient of prizes, such as the 2011 Swedish Museum of the year.