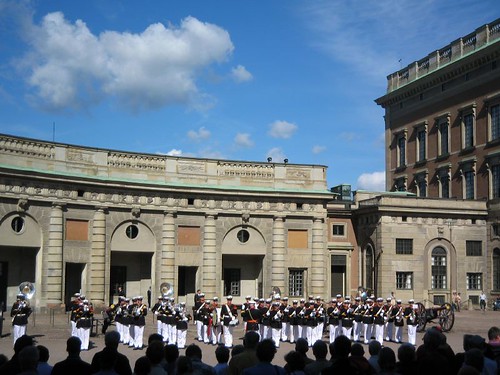 Army Parade in the courtyard of the Royal Place of Sweden at Stockholm.

There is also the:
•The Swedish Home Guard
Youngsters usually at the age of 15 to 16 may be recruited to serve in the Home Guard Cadets (aged between 15 and 20). Although they are not called soldiers, these members are trained in certain firearms depending on age and in battle fighting, besides other skills such as first aid and communication.

After a full 4 years as a Home Guard Cadet, the young adult has met the85 days of basic military training, as well as basic commander training. This enables the recruit to enlist as a Home Guard.

The Swedish Armed Forces is essentially a Swedish Government Agency that is accountable for maintaining and functioning of the country’s armed forces. The highest ranked professional officer on active duty is titled Supreme Commander who is a four-star general or flag officer, and this person is the agency head of the Swedish Armed Forces. This is the person who communicates via the Minister of Defence, directly to the Swedish Government.

The monarchy head (the king or queen) has a ceremonial role in the Armed Forces only, as head of state. Since 2010, it is not compulsory for all young male citizens to serve and train in the Swedish Armed Forces. After the Cold War it was referred to as peace-time conscription, today it is all voluntary and the Armed Forces have an active recruitment campaign.

The age for voluntary military duty is 16 to 70. The four main functions of the Swedish Armed Forces:
•Asserting territorial integrity of Sweden.
•Defence of the country if attacked by a foreign nation.
•Supporting civil community in situations of disasters, such as flooding
•Deployment of forces for international peace support operations.
Various units of the Swedish Armed Forces have been and are to this day deployed in international territories. The headquarters of the Swedish Armed Forces are in Stockholm and the current organisation as it is known now was formed in 1975.
Although it was recognised that during the 20th century Sweden placed an emphasis on producing or developing chemicals of mass destruction, since the 1970s all these plans have been ceased. Under the class of weapons of mass destruction, it includes nuclear, biological, chemical and radiological. Sweden has signed the:
•Nuclear Non-Proliferation Treaty, in 1968 which is an international treaty that focuses on preventing use of nuclear energy for use in weapons and to rather promote nuclear energy for use in peaceful energy developments.
•Chemical Weapons Convention, in 1994 which prevents development, making, storage and utilization of chemical weapons.

To support recruitment of citizens into the armed forces, Sweden uses various forms of innovative media campaigns and social online media platforms such as Facebook. Sweden of late has not in itself been at war, yet has been active in numerous peace-keeping operations internationally in partnership with other international organisations such as the UN.
There has been criticism that the Swedish Armed Forces have tended in current times to be more administrative concerned, focused on achieving higher ranking and income.