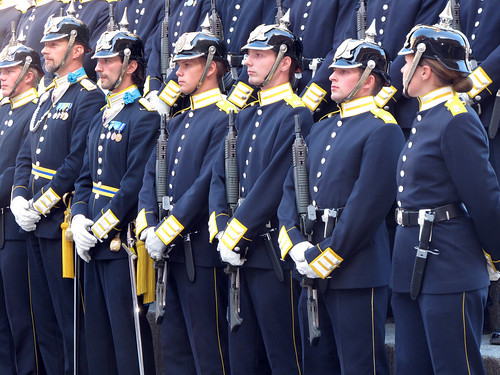 The Swedish Army is a branch of the Swedish Armed Forces. The army of Sweden is also one of the oldest in the world. It is recorded as having been active from 1521. The focus of the army is on land defence and operations.

Before the monarchy was the recognised formal head of the army, yet this has changed since 1975. The army service has transformed from one of conscript based to a professional army since 2010. The recruitment of civilian members for training and service in the Swedish Army is voluntarily.
There have been a number of times that the Swedish Army has been deployed in peace-keeping operations, in various other regions of the world.

The most senior representative of the Swedish land force is the Inspector General of the Army. Since World War II the number of active regiments has decreased.

There are units that the army contains:

•Merchandised units – operates tanks and other armoured vehicles. This unit has the main firepower and strike power, of all the units in the army. The unit is trained to fight in any terrain or urban environment.
•Calvary units – this unit trains military police, intelligence specialists and rangers. This unit also includes security units.
•Artillery units – train members in indirect fire that is land based. Weapon systems, command and control systems and censors are covered by this unit.
•Air-defence units – train units in ground based defence against aerial attack. Air defence weapons, censors, command and control systems are also covered. The main objective of this unit is to protect civilians and military bases from air based attack.
•Command and control units – this unit has units trained in electronic warfare. The main focus of this unit is to train members in the command and control of combat forces and for higher staff duties.
•Engineer units – weapon and ammunition training is an important aspect of this unit. The unit also focuses on changing the terrain or environment, in a way that blocks or causes delays to the enemy but will support and assist activities of Sweden’s own armed forces.
•Logistics unit – focus on supplying fighters or combat forces with medical, catering, repair and any other needed resources.
•CBRN unit – CBRN (Chemical, Biological, Radiological and Nuclear) focus on threats or incidents involving CBRN. Finding, identifying, watching, given warning, reporting, safe guarding and risk management of any CBRN incident are part of the prime functions of this unit.
The army has been involved in various engagements, some of them being:
•The Swedish War of Liberation
•Livonian War
•Polish War
•Kalmar War
•Seven Years’ War
•Finnish War
•2011 Libyan civil war

In the capital city of Stockholm, is the Swedish Army Museum where there is a display and record of military history.

In 2005 it was rated as the best museum in Stockholm. The building of the museum began being constructed in the 17th century and was the site of manufacturing and storing artillery weapons. Life sized figures of soldiers during various times in history and scenes of battles are part of the museum displays.