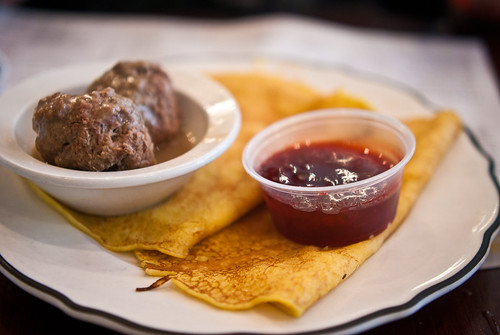 The coast line and many great waterways around the towns have ensured that seafood and fish have always been a mainstay of Swedish cuisine. The forests being the habitat of game meats, berries and mushrooms have led to these foods being an ubiquitous part of the dietary intakes.

During the warmer summer months when berries are in season, the general consumption of berries is greatly increased among the Swedes. Lingonberry sauce is made from lingonberries (and is often used in a similar way as to how one might use ketchup/tomato sauce, yet this sauce is used on a greater variety of food). It often accompanies meals such as meatballs, pancakes and porridge. It is a sweet sauce. It is not used as one might use jam, and therefore hardly spread on breads. Jams are common in Sweden, and may reflect bygone days when Swedes needed to preserve fruits for the bitter cold months in winter.

As time passed, Sweden has been highly influenced by foreign cuisine. From the 1960s, the nation incorporated pizzas and hot dogs and today kebab and falafel are part of the Swedish culture. This is a country that is known to adapt to various international cuisines, yet still be loyal in their diet to many traditional dishes. 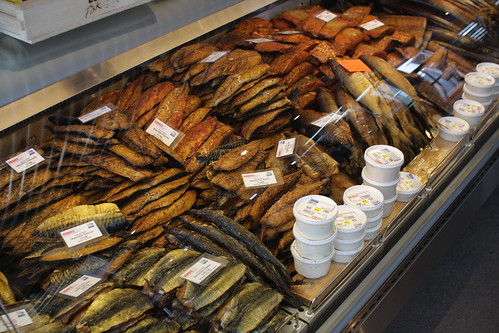 Potatoes have been a common carbohydrate source throughout the year in Sweden, and since the last 50 years rice and pasta have been widely used.

Every Thursday has been traditional soup day in the country. This evolved as it was customary to give maids a half a day off and soup was quicker to prepare by the maids before they went off from work. Soup meals also enable cooks to have another innovate way to use left overs.
In August there is the crayfish festival known as kräftskiva, when larger amounts of crayfish are consumed by many local citizens.

Breakfast may commonly be composed of a sandwich. The bread may consist of various soft breads and the filling might be cottage, goat or cream cheese, cold cuts of meat, eggs, cucumbers, and tomatoes and accompanied by a beverages of juice, coffee and honey.

Various types of smoked herring or salmon with boiled potatoes may be the popular lunch. Dinner may be meatballs, mashed potato with gravy;or potatoes and fish;or potato pancakes, pork and brown beans may be among the common dinner meals.

The main components of the basic Swedish cuisine have tended to revolve around cultured dairy products, breads (often with sugar), meat (pork seems to be quite favoured), fish, seafood, berries and stone fruits. Sugary bakery products are generally highly consumed by the Swedes.

The traditional recipes are more often flavoured with herbs and or jams rather than spices. The most common traditional fruit are apples (berries are used far more though). Longer cooking methods were often used, such as long boiling. Today many dishes have been adapted to have less fat and utilise quicker cooking methods. The term Swedish husmanskost means traditional Swedish dishes with local ingredients.