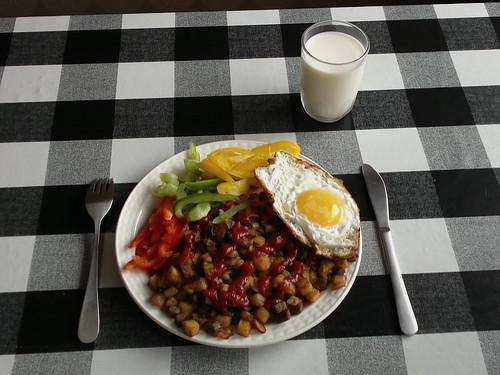 Some typical or common Swedish dishes:
•Kåldolmar (Swedish cabbage roll) was introduced in the 1700s. These are cabbage leaves wrapped around minced pork meat or rice. Supermarkets also sell them pre-made in frozen form for quicker preparation.
•Smörgåstårta which literally translated means sandwich -cake. While being salty it usually consists of several layers of light rye bread and creamy filings between each layer. Typically the base of the filings and toppings are egg and mayonnaise (yet they may vary). Other common ingredients of the base and toppings are liver paté, olives, shrimp, smoked salmon, caviar, grapes, tomatoes, cucumber, lemon slices and ham.

Combinations of cheeses and meats as well as vegan fillings and toppings are often used. As it is decorated as a cake and looks like a cake, it does have similarities to cake. It is served cold and sliced as one would a cake.

•Pyttipanna is similar to what is known as bubble and squeak in Britain, as it was originally made from a variety of left over foods and put all together to make a new meal. It may be vegetarian or vegan yet typically consists of potatoes, onions, diced and fried meats. Often served with fried egg, pickled beetroot, gherkins and capers.
•Fläskkorv is a Swedish sausage composed almost completely of pork. It is often served with mashed carrots, potatoes and swedes (a root vegetable that is a cross between cabbage and turnip). 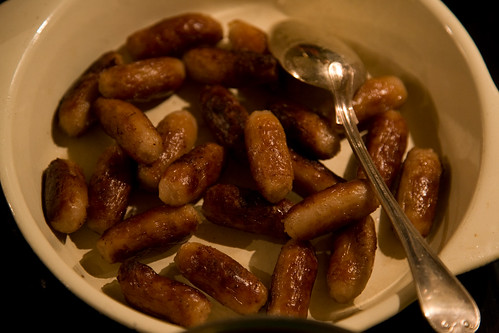 •Wallenbergar is a Swedish dish composed of ground veal, eggs and cream which are covered in bread crumbs. This dish is often served with mashed potato and peas.
•Yellow pea soup is a traditional national soup that is thick and made from yellow peas, onions, small pieces of pork, herbs and salt. It is usually served with mustard and then afterwards thin pancakes are eaten. The pancakes which are part of the meal may be layered with jam. Members of the Swedish Armed Forces tend to eat this meal every Thursday for lunch or dinner. The supermarkets also sell pea soup in plastic tubes.
•Prinskorv which translated means prince-sausage is sold in links of small sausages (each sausage being shorter than a Vienna). They are then fried and served with mustard.
•Gravlax or gravad lax is raw salmon cured for a few days in salt, sugar and dill and is sliced thinly to be part of an appetizer. Often served on bread or alongside boiled potatoes with a topping of sauce.
•Flying Jacob is a relatively new Swedish casserole dish (created in the 1970s) prepared with chicken, whipped cream, bananas, roasted peanuts, bacon and chilli sauce. It is usually served with rice and salad.
•Palt is a meat filled dumpling. There are numerous varieties and it is generally served with a topping of lingonberry preserves with an accompanying glass of cold milk.
•Isterband is a coarse grounded sausage that is lightly smoked. It consists of pork, barley groats and potato. It is usually served with creamed dill potatoes and pickled beetroot.