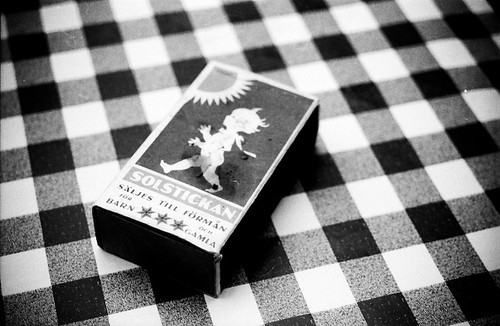 An old box of matches. The text on the bottom means: Sold to benefit children and the elderly.

It is all due to a Swedish match factory owner, named Johan Edvard Lundstrom, that we had the beginning of safety matches in 1855.

It was way back earlier in 1831, that the phosphorus match was invented. The production of these popular matches spread across Europe and would ignite when struck against any surface. However they were dangerous as they ignited much too easily and this resulted in numerous near-accidents. The phosphorus was yellow and toxic. This was harmful and in due times these matches had to be banned in one country after another for the well-being of all concerned.

It was in 1836, that the first match factory in Sweden began operating. This match factory was in Stockholm and called J.S. Bagge &Co. Then in 1844, a Swedish professor by the name of Gustav Erik Pasch patented a new invention. He worked out a way to prevent the matches from igniting against any surface or self-igniting, by splitting the chemicals in the match head and putting the phosphorus on a separate striking surface on the outside of the box. These are still used today with side striking surface on match boxes.

In the year of 1845, two Swedish brothers (Johan Edvard and Carl Frans Lundström) began manufacturing phosphorus matches in Jönköping. Soon the Lundström brothers took Pasch’s patent, improved it and made a trial batch of matches. These would be presented to the public in 1855. This product won its first medal, and these new safety matches were manufactured in parallel with phosphorus matches in the 1850s and 1860s.

In the 1860s and 1870s, technology developed quickly, and match production switched from handicraft to large-scale industry. The Jönköping matches went on sale all over the world, and they were soon as worldwide known as any product could ever be. Other entrepreneurs tried to imitate this successful match factory production.

Since those bygone years there have been 155 match factories in Sweden. Many did not last long in the business. There was a merger of six factories to form a single company;namely Jönköpings och Vulcans Tändsticksfabriks Aktiebolag, formed in 1903. The company’s headquarters were in Jönköping. Then ten years later in 1913, eight competing factories formed another match group, AB Förenade Svenska Tändsticksfabriker, under the leadership of Ivar Kreuger. Over the years, various companies joined forces with one of these groups, and the Swedish match industry was finally made up of two large blocks.

Then another great invention was made in 1992, when Swedish Match introduced an environmentally friendly product;named THE SULPHUR-FREE MATCH. The harmful heavy metals had been removed, and the matches consist mostly of renewable raw materials.
Today Swedish Match’s operations are run in Vetlanda and Tidaholm, while there products are being exported to about 80 countries across the world.