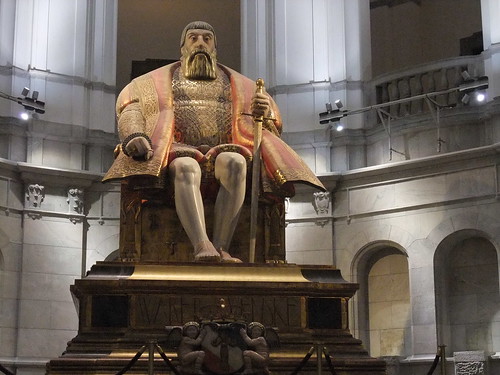 Gustav Vasa (the father of Sweden) sculpture by Carl Milles.

Gustav I of Sweden also known as Gustav Vasa, was born Gustav Eriksson. It is thought that he was born in the month of May in 1496 (his gravestone records it as 1485;other accounts from other relatives indicate different years of birth). From the years 1523 to September 1560 when he died;he served as King of Sweden.

The man who would one day govern Sweden as an independent country from Denmark was the eldest son of a man named Sir Eric Johansson, who is recorded as having been the governor of a group of islands in the Gulf of Bothnia.

Gustav Vasa had a huge passion to liberate his country from the unfair treatment from the Danes. At one point after several years of war from the Swedes, King Christian of Denmark was anchored at Stockholm and defeated. A truce was agreed on;yet for show of good faith, six hostages were given to the Danish King until the treaty was signed. The Danish King did not keep his word and as the wind changed course he set sail with these ‘Swedish rebels’. Gustav Vasa was one of the hostages.

Despite two years of being held as a captive prisoner, Gustav Vasa did one day manage an escape to the city of Lübeck. This was independent of Danish rule. The citizens of Lübeck agreed to support this young courageous Swede, as it would be to their advantage to have Sweden as an independent and free ally. There was a prize from the Danish King to whoever could kill the escaped Swede, many Danes searched for him while Gustav Vasa lived under disguise. In 1525 the Danes finally surrendered their last stronghold in Sweden, due to Gustav Vasa leading and encouraging many Swedes to rebel and fight back.

After about five years since been taken as a prisoner, this man was supported by many Swedes to be the king.

After Gustav I became king, the Pope wanted Gustav Trolle reinstated as archbishop. As Gustav Trolle was considered to be an ally of the Danish King, other recommendations were suggested for a new archbishop by the Swedish King;yet the Pope declined them. The King ultimately elected and appointed a new archbishop without the Pope’s consent. This was the beginning of Lutheranism in Sweden as the Catholic power had been over-ridden. The Swedish King was influenced by Olaus Petri (a Lutheran scholar) and it was this man’s brother who was the new archbishop.

Gustav I had three wives, in chronological order they were:
Catherine of Saxe-Lauenburg who lived from 1513 to 1535 and bore him a son, namely Eric XIV Duke of Kalmar, four years before her death.

Gustav I and his wives are buried in the Cathedral in Uppsala. He is remembered as having served his country exceedingly well.