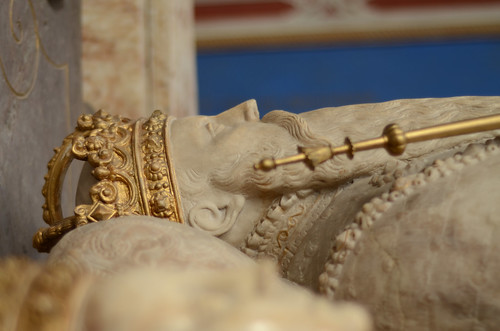 King Gustav I of Sweden.

The monarchy of Sweden is presently a constitutional one, yet it was not so before the late 1800s and early 1900s. Sweden has had many kings yet it is only from the time that Sweden gained independence from the Kalmar Union and had King Gustav Vasa named as the king in 1523, that there are more clear monarchy records. From 1544 a hereditary monarchy has been firmly established. Before that time the monarchy was elected.

It seems that from the earliest times of the monarchy, dated to the 1st century, that king had warchief, judge and priest like functions. With the introduction of Christianity into the country, the king gained more power and authority. In 1809, the legislative power was divided between the Riksdag and the King (secondary)

From 1917, the political power of the monarchy was reduced to a limited influence. Since the year of 1975, the king has no more political influence and only has ceremonial and representative duties. The monarchy also chairs some significant political meetings/sessions.

Although today the monarch is officially the head of state, and has the highest state office in the country and by courtesy the highest military and social rank;they do not have political power.

Since the time of King Gustav Vasa, each monarch has had an individual motto. In other countries a motto is usually the same for the whole dynasty. The following are some noteworthy mottos of various kings:
•King Gustav Vasa – All power is of God
•Queen Kristina – Wisdom is the realm’s support
•Adolf Fredrik – The welfare of the state, my welfare
•Oscar I – Right and truth
•Carl XVI Gustav – For Sweden – With the Times

A French marshal, named Jean Baptiste Bernadotte was elected as the king within the Swedish parliament in the city of Örebro in 1810. The election was by the Riksdag and done only as there were no rightful royal heirs to the throne. From that time a new order of succession was to the eldest son until 1980, when the order of succession was changed to the monarch’s oldest child, regardless of gender. This has ensured that Princess Victoria, the eldest daughter of the current king may rightfully be awarded the monarchy leading role.

There have only been two women who have served as monarch rulers, namely Queen Christina and Queen Ulrica Eleanor.

Princess Victoria is due to be the third female monarchy, as Queen Victoria as soon as her father resigns or cannot perform any more royal duties as the monarchy head of Sweden.
There are stipulations that all the members of the royal family serving/representing the monarchy be Protestant Christians of the Church of Sweden.

There have been eleven dynasties in the Swedish monarchy. The following is a line of successive monarchy families since the time of King Gustav Vasa:

•Vasa Dynasty ruled from 1523 - 1654
•Palatinate-Zweibrücken Dynasty, a branch of Wittelsbach ruled from 1654 - 1720
•Hesse Dynasty ruled from 1720 - 1751
•Holstein-Gottorp Dynasty, a branch of Oldenburg ruled from 1751 - 1818
•Bernadotte Dynasty ruled from 1818 to the current date
Sweden is being currently served by its 74th king, namely King Carl XVI Gustaf, who has been the monarchy ruler since 1973. The next crowned monarchy ruler will be Princess Victoria. The monarchy is constitutional as the constitution determines and controls the role of the monarchy. It is the monarchy that represents the country and performs ceremonial duties. The monarchy may represent the state, host important charities and do much fund raising for charities and goodwill organisations.
The current king and queen of Sweden live in Drottningholm Palace – a UNESCO World Heritage site (since 1981), situated outside of Stockholm.