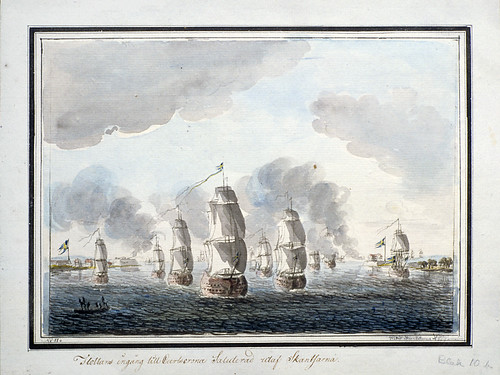 The Swedish navy on its way in to Karlskrona in July 1789, Blekinge, Sweden

The Swedish Navy Force is a branch of the Swedish Armed Forces, which manages and controls the national security, protection and safeguarding in the sea yet works together with land units.

The aim of the navy is to venture into international waters in times of international conflict, or to defend the nation against attack. During times of peace the navy has a role in supporting civil community.

As Sweden has had to defend itself from invasion and attack for many years, due to it being bordered by the sea;the Swedish Navy Force has officially been recognised since June of 1522. Many years prior to this the coast lands of Sweden were watched by men on sail and rowing boats, without any artillery.

The navy has fleet units (which are composed of submarine and surface units) and marine units (the amphibious corps, which means the units can function in water and on land).

To prevent a mix up of a Swedish vessel from a Royal British navy vessel;all Swedish navy vessels end with the English prefix of HSwMS (His Swedish Majesty's Ship). Over the years the navy has removed its cruisers, and utilised lighter fleet such as the corvettes. The modern corvettes are the largest combat ships or vessels owned by the navy currently and they have operations for a variety of functions of surface warfare, antisubmarine warfare and mine clearance. 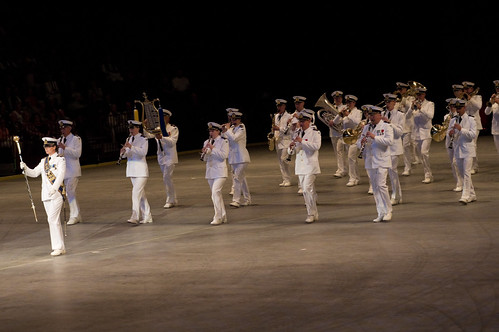 The Band of the Royal Swedish Navy

The senior representative of the navy force is titled the Chief of Staff Royal Swedish Navy and Commander Maritime Component Command.
The naming of Swedish vessels is special and since the 1980s has been based on:
•Swedish surface warships being named after Swedish cities
•Submarines named after Swedish provinces
•Minehunters after Swedish lighthouses

The first UN led peace-keeping mission, which the Swedish navy Force took part in was in 2006 in Lebanon.

The band is known to play at concerts, special events and schools. This highly skilled Band of the Swedish Navy can adapt for various occasions such as when it is entertaining the public in simple military performances, to classical performances or when catering for children.

Originally the Navy Band was limited to playing brass instruments, and then in the 1920s some woodwind instruments were also played. Civilians may see the Band of the Swedish Navy in summer, when it is customary for the band to sometimes play during the changing of the guard at the Royal Palace in the capital city of Stockholm.

The Maritime Museum in Stockholm is dedicated to showcasing naval history. It is in the basement of this museum, where visitors can view a cabin from King Gustav III’s ship named the Amphion. Along the park, around the museum, there are annual concerts. The museum was founded in May 1938. There is memorial for the Swedish sailors who died during World War II, in the form of a statue titled ‘The Sailor’.