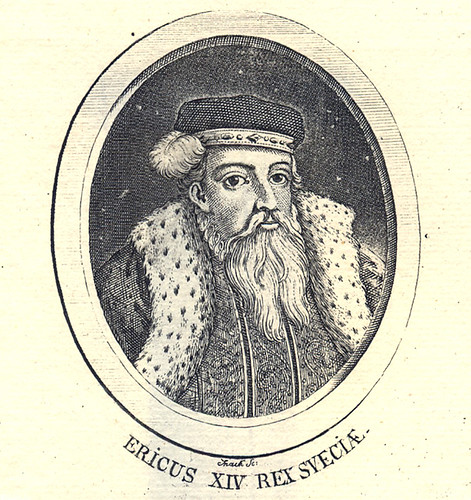 Ericus XIV by Stifts- och landsbiblioteket i Skara, on Flickr.

Certain aspects accompanied being a noble:
•The Swedish nobility were exempted from paying tax in bygone days. From 1280, the king declared that any landowner that could equip a cavalryman (man performing as a soldier on horseback to do battle) or be one himself would be exempt from taxation. This was known as the Decree of Alsnö thatmagnates.

During 1280, the only other group of the population having been exempt from tax was the clergy. Consequently the frälse (an ancient Swedish name for nobility) could also include clergy (as they shared the same benefit).

•Rank of nobility was inherited from 1561. It was from then that one was either born into a noble family or was ennobled by the King or Queen. After being ennobled by the monarch the new noble had to apply for introduction into the House of Nobility. By being introduced, the noble had greater standing politically.
•Right to own a fief
•Customarily to have served in the military and government

In history the nobility of Sweden were a legally protected and privileged group of the population. Although in our current time, the nobility have less of the previous privileges;they do still have social privileges. A Swede belonging to the nobility has his or her family name, titles and coat of arms protected by law. No one has the right to take it and use it for themselves.

Although it was legal for the Swedish monarchy to ennoble people, the right is no longer recognised since 1975. However Royal princes and Royal princess may be made into dukes and duchesses. During the 18th century two princes were ennobled and the last man to be ennobled in Sweden was Sven Hedin in 1902.

Most of the noble families have a title, such as that of count or baron and all family members may use it. There is however a small number of families, where only the head of the family may use the title such as Count or Baron. The other family members related to the Count or Baron are still recognised as noble though.

The nobility had a major part to play in politics in historical times and would attend assemblies at the House of Nobility. From historical records it becomes evident that from 1680, there has been a gradual loss of privileged standing of the nobility in Swedish culture. Due to the end of the Riksdag of the Estates in 1866 and the introduction of the new Riksdag in 1866, the nobility had practically not any significant political privileges. The final tax exemption awarded or permitted to Swedish nobility was in 1920s. The minor association of nobility with government and the state was ended in 2003.