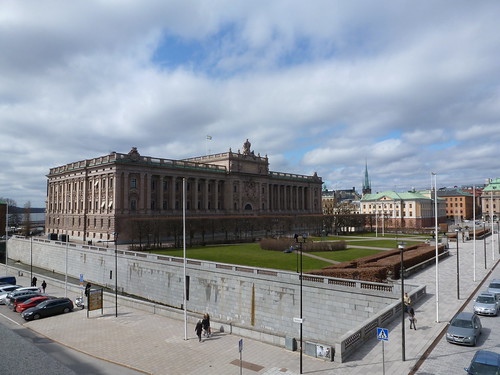 Shot of the Riksdag building from the ramp to the front entrance of the
Royal Palace in Stockholm.

The history of the Riksdag seems to have begun in the town of Arboga, when a meeting was held by the nobility of Sweden in 1435. Then in 1527, this informal organisation was modified by King Gustav Vasa to include representatives of the four social estates. These four social estates consisted of the nobility, the clergy, the bourgeoisie (merchants, tradesmen, lawyers, etc.), and the peasantry (farmers). In 1865 the modern bicameral parliament was formed and the representation by the four recognised social estates was ended. Louis De Geer, designed the bicameral parliament system and was the first government prime minister of Sweden in 1876.

During 1866, the Riksdag was divided into the bicameral legislative of the First Chamber of 155 members and the Second Chamber of 233 members. The First Chamber was indirectly elected by county and city councillors, while the Second Chamber was elected by the general population. However it was not until 1917, that Sweden began to implement parliamentary principles. In 1970, a unicameral group of 350 Riksdag members were elected. To prevent ties of vote, in 1976, the number of Riksdag members was reduced to 349.

The Riksdag is a legislative assembly in Sweden that makes the ultimate decisions about the country. It consists of 349 members who are elected on a proportional basis and who then serve on four fixed terms. The members are elected every four years, during the general elections. Any citizen or former resident of the country can vote in the general elections yet must be 18 years or older. For any political party to be represented in the Riksdag it must receive at least 4% of the population vote in the general election. These elections to the Riksdag are conducted every third Sunday in the month of September every four years.

In the central part of Stockholm there is an island, the Helgeandsholmen Island which is the site of Parliament House. Parliament House is the building where the Riksdag convene. The Swedish Riksdag, is among the world’s parliaments having the highest number of female members serving in it, relative to male members. Although the salary of of a Riksdag member may be affluent, the member works long hours and the person generally sleep less than average members of society.
The government is elected after the leaders of the various groups of the Riksdag have had talks with the Speaker of the Riksdag, who then nominates a prime minister. There is then a vote and if less the 175 disagree it will go through and the nominee will be the prime minister. If 175 or more vote no on the nominee, then another nominee is suggested. As many parties do not seem to have gained more than 50% of votes by the public, the parties tend to collaborate to become stronger in numbers with their coalition.

Each year in September, there is the opening of the Riksdag, after the summer holidays. During the opening the prime minister delivers a speech, referred to as the Statement of Government Policy. This outlines the policies and goals for year ahead.