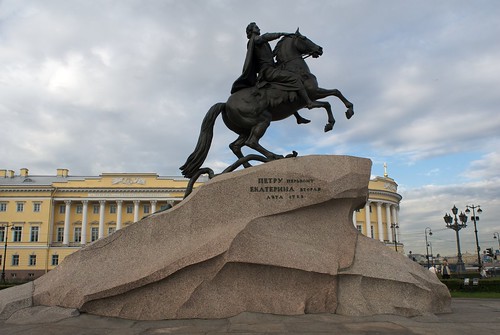 Peter the Great of Russia

This was a war that lead to Sweden losing much of the territories it had acquired. From about 1560 to 1658, Sweden had amassed lands in Germany, Norway and Denmark. It was Sweden’s Baltic empire focused along the Gulf of Finland that also gave it more power.

The Great Northern War began in 1700 and would last for 21 years. The fighting extended across Northern, Eastern and Central Europe. A coalition of forces opposed the Swedish Empire in Northern Europe and declared war on Sweden.

The coalition was comprised of:

•Peter the Great of Russia (powerful force against Sweden)
•Frederick IV of Denmark–Norway
•Augustus II the Strong of Saxony-Poland-Lithuania.
•Frederick IV and Augustus II were compelled to leave the alliance in 1700 and 1706 respectively, yet re-joined it in 1709.
•George I of Brunswick-Lüneburg (Hanover) joined the coalition against Sweden in 1714 for Hanover and in 1717 for Britain
•Frederick William I of Brandenburg-Prussia joined the coalition in 1715
The leader of the Swedish force was King Charles IIX. As the Swedish king was young and inexperienced at age 18, the opposition chose this as a prime time to attack. Swedes were supported by:
•Holstein-Gottorp was a name of the lands which were ruled by the dukes of Schleswig-Holstein-Gottorp and some Kings of Denmark. All of these rulers and their kinsmen were referred to as the Duke of Schleswig, Holstein, Dithmarschen and Stormarn. The lands that these dukes ruled included areas in various regions including Sweden, Denmark and Norway.
•Various Polish and Lithuanian magnates under Stanislaw Leszczynski (1704–10)
•Cossacks under the Ukrainian Hetman Ivan Mazepa (1708–10).
•The Ottoman (also known as the Turkish) Empire temporarily hosted Charles XII of Sweden and intervened against Peter I. The Turkish Empire was a major empire and during the time of this war was undergoing a stage of stagnation and transformation.

The Swedish King was shot dead in 1718 and his sister took over as monarchy head, namely Ulrika Eleonora. Soon her husband, Landgrave Frederick I of Hesse-Kassel, took over as monarch head. Yet he was prone to drinking while being recalled as unsuccessful as a king, and monarchy power had been dissolved;with some authority by the Riksdag by that time. Yet Frederick I began negotiating treaties from 1718, for peace and a number of treaties were signed soon afterwards.

The Treaty of Nystad was the final treaty to bring about peace at the end of the war, focused between Russia and Sweden.

History records reveal that due to the treaties after this war significant changes of territory took place:

•Russia obtained 3 Swedish dominions Estonia, Livonia, and Ingria, also sections of Kexholm and Viborg.
•Prussia won sections of Swedish Pomerania.
•Hanover obtained Bremen-Verden.
•Holstein-Gottorp had to give its part of the Duchy of Schleswig to Denmark.

This war was the turning point and end of Sweden as a major empire and it lost its dominance on the Baltic Sea. The Russians gained power of the Baltic Sea and began to have important roles in European politics, due to increased strength.