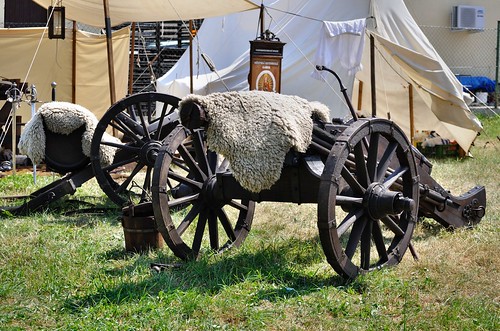 Swedish field gun from times of the Thirty Years' War.

This was a long war that was fought from 1618 to 1648. The war raged over most of what is today known as Germany and involved many European powerful countries. Basically it was about religion, a war fought to determine the power of one religion over the other. The two sides were Protestant and Catholic. However other subtle powers, such as the dominance of dynasties were also implicated.

There was a great desire by the Roman Catholic Church to prevent the spread of Protestant teaching and ways of worship across Europe. The Habsburgs was an imperial family that wanted to gain greater control of the Roman Catholic Church as the church at the time had major power, especially political. The Protestants fought back as their right for religious freedom was being threatened and they wanted political freedom form the Habsurgs.

The Holy Roman Empire, before outbreak of this major war, was composed of Catholic in the south and Protestants in the north generally. There was also an assortment of Protestant and Catholic states that had an influence within Germany. The Habsburgs wanted to change the political structure of Germany, to gain more definite power.

In 1630, when the war was in full force, the Swedish king known as Gustav II Adolf was a confident battle fighter and had built up a strong army and navy fleet. King Gustav II Adolf had descended from the Gustav Vasa line, was anointed king at age 16. He had great skill as a fighter. He is remembered as having led his men into battle many times and achieving great victory. Sweden at the time had various sections of lands with small populations. To prevent successful invasion, the king designed a way of fighting that was focused on counter-attack rather than defence with great numbers.

Due to the rule of the king, who would later die in battle in 1632, Sweden had developed one of the best equipped and trained armies. It was the Swedish king’s great skill as a battle fighter and commander that would lead to him being called and remembered in history as ‘The lion of the North’. The Swedish force only entered the Thirty Year’s War 12 years after it began to side with the Protestants;yet history reveals that Sweden was the most successful of all countries involved and had killed about half of the Roman Empire’s national army, that is about 100 000 men.

Of the 18 battles between Sweden and the Imperial Army of the Holy Roman Empire, most were fought with Sweden having a lower number of troops yet most of the battles were won by the Swedes. One battle is still disputed as to who won.

The Holy Roman Empire had imperial troops and was considered a major force, yet the Swedish army had major success in gaining access into Catholic territory. Then in 1648 peace of Westphalia was signed and the war was put to an end after 30 years of fighting battles.

Sweden rose up in European power after this war, while the Holy Roman Empire did seem to decrease.