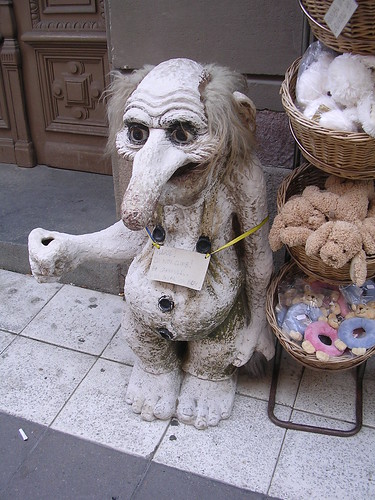 The troll is a well-known mythological creature, not only in Sweden yet also in surrounding Scandinavian countries.

Trolls are reputed to be anti-Christianity, since the religions became a stronghold in Sweden in the 1300s. To this present day the smell of Christians and the sound of church bells greatly disgust trolls. The residence of a troll may be a castle, forest, under bridges, in lakes, sea shore or mountain. A troll that is rumoured to live on a mountain is considered a wealthy troll, with piles of stored gold and silver. The trolls that live alone and isolated in huts within a forest, are deemed to be the most dangerous.

A trollkoner is a female troll;generally only rarely do trolls have a trollkoner wife. Most trolls are thought to kidnap a beautiful young women or princess. The captured female is left to spend her days spinning and her nights scratching the troll’s head.

It is among some Mountains, that the king of all trolls lives.

Basic physical traits of trolls are to be truly huge, hairy, gross and ugly in appearance yet still have a resemblance to humans. It is worth recognising that an actual troll may come in varying shapes and sizes, some may even have 9 heads. The appearance of a troll is liable to change as trolls can alter their physical body to present an enticing appearance. This draws the human to the depths of the troll’s home and soon the human will be held captive for many years. Sometimes a troll may even appear as a human.

Although a troll is considered cruel, all trolls are deemed to be stupid and have a dull mental capacity. Other associated features of a troll, is to be quite old yet strong and have a reputation for eating human flesh. The favoured pet of a troll is the bear, and trolls have a similar nature to bears;being peaceful when left alone yet prone to savageness when teased.

The main weapon against a troll is sunlight, as it is when a troll is exposed to sunlight that it will turn to stone. In stone form it is harmless. Yet there is a type of troll that is not vulnerable to sunlight, namely the Olog-Hai. There are still mythologies linked to some landmark large stones, which are believed to have once been trolls, due to sun exposure the troll transformed into a significant stone piece.

Some popular fairy tales that incorporate the troll include:
•The Three Bill Goats Gruff – a tale of three goats crossing a bridge. Yet beneath the bridge lives a troll.
•The Lord of the Rings – a tale involving a variety of trolls.
•Harry Potter series – various troll characters are part of the story at some stages.

Since 1959, troll dolls have been made for ornamental display and for children. They are made in a way to look generally cute with a tuff of fluff upright hair. These dolls came in various sizes, with each doll having its own hair colour, such as blue, purple, orange, green or red.