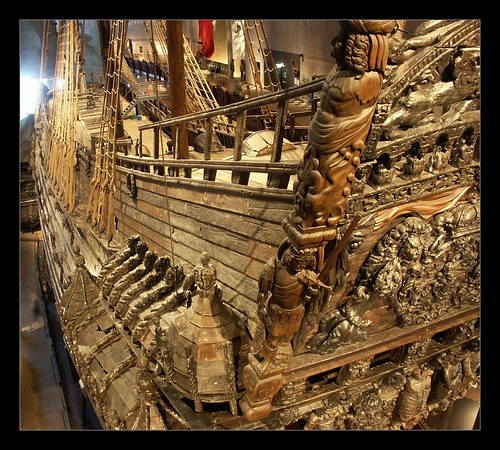 The only surviving 17th century ship in the world. Vasa Museum Stockholm, Sweden.

Vasa Museum – This museum began in 1990 and has the only 17th century ship, which was salvaged in almost full condition. The parts that were damaged have been repaired or replaced. The stern was badly ruined, yet with much care it has been restored to its former glory as much as possible. This ship, named Vasa, was a 64 gun ship which capsized in 1628.

The weather on that day, 10 August,in 1628 was calm. The ship was leaving a harbour from Stockholm. Part of the reason of the capsizing is linked to it carrying heavy cannons on its gun decks. There were 64 bronze cannons;of these more than 50 were salvaged in the 17th century. Currently the Vasa Museum displays three of these heavy weighing cannons. The sinking Vasa took the lives of about 50 on-board sailors with it. Only the guns were rescued and bought to surface.

Originally it took almost two years to build the Vasa, a proud part of the Swedish navy. Over a thousand oak trees are reputed to have been used in the construction of the hull. Swedes, Finns and the Dutch were part of the main builders of the Vasa ship.

Many years later in 1956, a researcher had a keen desire to search for the ship and eventually it was discovered. It took another 17 years to restore and have the ship in a state to be viewed. These 17 years include the time it took to slowly raise the ship in stages, by use of cables. Then in May of 1961, Vasa reached dry land. The Vasa now is situated in a museum less than a nautical mile from the site of its sinking. 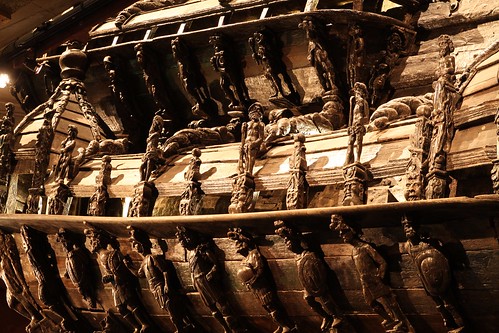 The figurehead of the Vasa has a lion’s head. The inspiration for the figurehead was based on King Gustav II Adolf, who commissioned the ship. A name that the King was often referred to as was the Lion of the North.

A part of the upper gun deck has been made in a replica form;this enables visitors to have a closer idea of what conditions on the ship were like. There are also carved wooden dummies of sailors situated in the replica.

Carved ornaments and sculptured figures are part of the decoration of the Vasa ship.

This Stockholm museum is focused as a maritime museum. The Vasa Museum has been recognised as the most visited museum in Scandinavia. There are four other ships that are part of this museum, an ice breaker, a torpedo boat, a light vessel and a rescue boat. These four ships are moored at the canals next to the Vasa Museum. Within the actual museum, the Vasa ship can be viewed from six levels. There is a movie theatre linked to the museum, which displays a film on the recovery of the Vasa ship. This film can be watched with subtitles for various languages.

Visitors to the museum are not permitted to board the Vasa ship.

The museum is open generally every day of the week and it closes later on Wednesday.